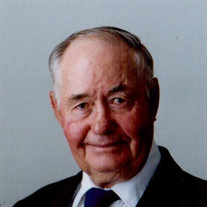 Delmer Dawayne Milner was born October 13, 1929 at home near Imperial. He was the middle child of seven children born to Lawrence (Pate) Leonard and Irene (Roberts) Milner. He grew up in the southwest corner of Chase County, attending Prairie Gem grade school and graduated from Chase County High School in 1947. Delmer married Wilma Ruth Schiermeyer on February 16, 1954 at Holyoke Colorado. They moved into a trailer house on the family farmstead while their house was built. Delmer was a successful farmer and rancher on the family farm for his entire life. He was very proud of his military service. He served in the army in the Korean War as a corporal. Enlisting August 23, 1951 and served until June 25, 1953 as a gunner in the army. He earned the Korean Service Medal, 3 Bronze Service stars and the United Nations Service Medal. He served on the Lamar School Board and enjoyed helping his children with their 4-H steers and baseball. He played softball and baseball for many years until a back injury made him retire from his favorite activity. He enjoyed playing cards and Aggravation with friends and neighbors. He was always there to help his friends and neighbors. They knew he would drop everything and help. He fought several prairie fires. Delmer passed away early Thursday morning, January 25th, 2018 at the Imperial Manor. He was 88 years old. He is survived by his wife Wilma; and four children daughters Jayne (Neil) Henry of Imperial, Mary Ann Madden and Ivan Kenter of Cascade Montana; sons Robert (Jippi) Milner of Champion, and Charles of Imperial. Grandkids; Tasha (Aaron) Nelson of Martell Nebraska, Trey, Destyn, Kadyn, Jerzee Milner of Imperial; Lance Milner of Lincoln, Nebraska, Jake (Kim) Milner of Denver, Colorado; Elisha Madden of St, Francis Kansas and Owen Madden of Palisade Nebraska. Great grandchildren Kyle and Ashley Nelson of Lincoln. Sister Virginia (Carl) Ridlen of Fairview Tennessee, Brother Leonard (Effie) of San Jose California, sister-in-law Monna (Ron) Milner of Imperial and, brother-in-law Dale (Viola) Bischoff of Wauneta, Nebraska. Many nieces and nephews and friends. Delmer was preceded in death by his parents and brothers Charles in World War II, Dean Milner, and Ron Milner, sister Viola Bischoff, and sister-in-law Skip (Dean) Milner and Dorothy (Dean) Milner Funeral Services for Delmar Milner will be 10:30 A.M. (MT) on Monday, January 29, 2018 at the First United Methodist Church in Imperial with Pastors Dirk Weiss and Melody Newman officiating. Interment will follow at Mount Hope Cemetery in Imperial with full Military Honors. Visitation will be prior to services, the morning of services at the Church in Imperial. In lieu of flowers a memorial has been established in Delmar’s memory. Online condolences may be left at liewerfuneralhome.com LIEWER FUNERAL HOME IS ENTRUSTED WITH ARRANGEMENTS

Delmer Dawayne Milner was born October 13, 1929 at home near Imperial. He was the middle child of seven children born to Lawrence (Pate) Leonard and Irene (Roberts) Milner. He grew up in the southwest corner of Chase County, attending Prairie... View Obituary & Service Information

The family of Delmer D. Milner created this Life Tributes page to make it easy to share your memories.