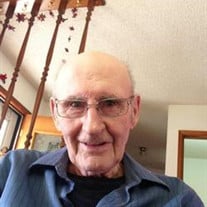 Dean Mitchell Dean Howard Mitchell was born December 15, 1927, to Howard Charles and Frances Arlene (Erkenbrack) Mitchell on his parents’ farm in Republic County, Kansas. Dean attended rural grade school and Republic High School. He continued his education at Kansas St. College, where he played football and was a member of the ROTC. As a Staff Sargent, Dean marched his platoon for President Dwight Eisenhower. On August 30, 1948, Dean and Evelyn Rasmussen were married at Bellville, Kansas, in the United Methodist Church yard. The couple made their home in Republic, Kansas – Dean farming with his Dad and Evelyn at the post office. In February of 1950, Dean and Evelyn and baby Cindy became Cornhuskers by replacing Dean’s uncle Earl Erkenbrack on the North Maddox Ranch as renters. By 1964 the family grew with the births of Debra, Marcy and Doug. That year was a big one for them, buying the Dude Rowley Ranch, adjoining ground from Connie Downs and Letha McCoy. In that same year, Dean, Evelyn and family moved into Imperial. In early 1965 the couple bought Bab’s Café, which was located where Viaero is now. They later moved the location of the Café to the building where St. Isadore’s Thrift Shop is located today. Dean farmed during the day and cut meat at night and joined many organizations including the Ike’s, Eagles, and Lions Club, which he was a member since 1971. Dean was a member of the United Methodist Church of Imperial. He served as Mayor of Imperial from 1986 to 2002, member of the Chase County Fair Board, Chase County Economic Development Board, and a member of the Blanch School Board. Dean enjoyed golfing and bowling. He had a lifetime love for the game of baseball. Dean coached little league and started the T-ball program in Imperial. He also loved to fish on their pontoon boat. In addition to these many activities, Dean also was a lover of music and had a collection of nearly 100 music boxes. Dean passed away Monday morning at the Imperial Manor Nursing Home in Imperial. He was 87 years of age. Dean was preceded in death by his parents, Jack and Arlene. Survivors Include: Wife: Evelyn of Imperial, NE. Daughter: Cynthia Cady and husband Jim of Blue Springs, Missouri. Daughter: Debra Nix and husband John of Maui, Hawaii. Daughter: Marcy Nesbitt and husband Mike of Imperial, NE. Son: Douglas Mitchell and wife Shelley of Imperial, NE. 7 grandchildren: Jennifer (James) Kennedy, Tricia (Ron) Brashear, Jeremy (Carrie) Nesbitt, Alicia Nesbitt (Kenney Bell), Zachary (Jess) Nesbitt, Jasmine (Derek) Hahn, and Sean Mitchell (Geraldine Chavira). 13 Great-grandchildren: Justin, Jacob, Jonathan, Kayla, Allison, Kendra, Reagan, Daniel, Aleah, Alexi, Alayni, Alindy, and Karson. Funeral services for Dean Mitchell will be 2:00 P.M. (MT), Friday afternoon, June 5, 2015, at the First United Methodist Church of Imperial with Pastor Valera Heydenberk officiating. Interment will follow at Mount Hope Cemetery, Imperial. Visitation will be Thursday afternoon, June 4, 2015, from 2:00-6:00 P.M. (MT) at the Funeral Home in Imperial. Memorials have been established to the Imperial Public Library Foundation and the Imperial Lion’s Club. Online condolences can be left at liewerfuneralhome.com LIEWER FUNERAL HOME IS ENTRUSTED WITH ARRANGEMENTS

The family of Dean H. Mitchell created this Life Tributes page to make it easy to share your memories.