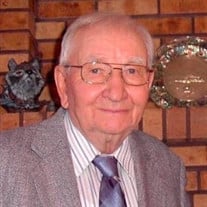 Dean Haarberg Dean Edgar Haarberg was born December 25, 1927 at home on a farm two miles southwest of Sharon Springs, Kansas. He was the third of four children born to John and Anna (Alsleben) Haarberg. Dean was baptized on January 15, 1928 at the Dover school house in rural Wallace County, Kansas. In 1934, his family moved back to a farm in rural Chase County near Champion, Nebraska, due to drought and the Great Depression. He was a member of Immanuel Lutheran Church as a child and was confirmed on March 29, 1942. He attended District 33 grade school near Champion and later graduated from Chase County High School in 1946. After graduation Dean farmed with his father and his brother until his induction into the U.S. Army on November 29, 1950 due to the Korean War. He received infantry training at Ft. Riley, Kansas for fourteen weeks as part of the 10th Infantry Division. After basic training, Dean was sent to Inchon, Korea, as part of the second U.S. landing force. Needing radio operators he was one of the few to be selected for radio school for three months training in military communications. After Signal Corps training, he was sent to the front lines to support the 6th ROK (Republic of Korea)Division as part of the U. S. 24th Division. His unit provided critical communications for combat units on the front lines and aerial reconnaissance. Dean received his honorable discharge at the rank of Corporal on August 28, 1952. After his military service, Dean resumed farming in Chase County. He was united in marriage to Bernice Selma Ackermann of McCook, Nebraska on April 25, 1954 at Peace Lutheran Church in McCook. They celebrated 61 years of marriage until Bernice passed away July 9, 2015. To thisunion three sons were born: James Dean, Wayne Lee, and Brian Dale. They made their home on the farm 1 ½ miles west of Imperial until moving to town in 1991. Dean and Bernice also enjoyed traveling to many places across the U.S. as well as abroad. During his years of farming, Dean was elected to many leadership positions and was a member of multiple state and local organizations. These included the Chase-Dundy Wheat Growers Association, Corn Growers Association, ASCS and FHA committees. He was also a seed corn representative for many years. Dean was an active member of Zion Lutheran Church serving on numerous boards of the congregation. He enjoyed singing in the church choir and was a long time member of the Lutheran Laymen’s League. Preceding Dean in death were his parents John and Anna Haarberg, wife Bernice, sister Irene Kunnemann and brother-in-law Arnold Kunnemann, sister Darlene Gissler and brother-in-law Lee Gissler. Dean passed away on the morning of December 29, 2015 at Great Plains Medical Center, North Platte, NE. Survivors include his children: James Haarberg and wife, Mary of Imperial, Wayne Haarberg of Imperial and Brian Haarberg and wife, Sondra of Frisco, TX; grandson, Nathan Haarberg, Frisco, TX; step-grandchildren: Amy Roeder of Omaha, NE, Kevin Thomas of Omaha, NE and Heather Bennet of Dallas, TX. Brother; Elton Haarberg and wife, Dot, of Colorado Springs, CO. Brothers and Sisters-in-law: Vera Eaton of Arvada, Co. and Harvey Ackerman of McCook, NE In lieu of flowers, memorials have been established to the Zion Lutheran Church. Funeral services will be held Monday, January 4th, 2016 at 10:30 a.m. at Zion Lutheran Church, Imperial, Nebraska. Interment will be at Mount Hope Cemetery, Imperial. LIEWER FUNERAL HOME ENTRUSTED WITH ARRANGEMENTS

Dean Haarberg Dean Edgar Haarberg was born December 25, 1927 at home on a farm two miles southwest of Sharon Springs, Kansas. He was the third of four children born to John and Anna (Alsleben) Haarberg. Dean was baptized on January 15, 1928... View Obituary & Service Information

The family of Dean Edgar Haarberg created this Life Tributes page to make it easy to share your memories.