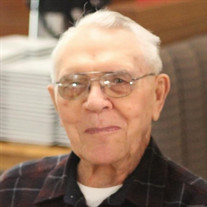 Dean Allen Erdman was born to Ernst and Blanche (Stamper) Erdman on July 2, 1926 at Haigler, Nebraska. Dean attended a country school north of Haigler through the sixth grade. He went on to parochial school in Amherst, Colorado during his seventh and eighth grade years and finished his formal education when he graduated from the Curtis School of Agriculture in Curtis, Nebraska in 1944. Dean entered the Armed Forces in September of 1950 and served until 1952 Dean was baptized and confirmed at the St. Paul Lutheran Church in Amherst, Colorado. He later transferred to the Calvary Lutheran Church in Wray, Colorado. At present time he was a member of Zion Lutheran Church in Haigler. In 1953, Dean married Esther Morrison. To this union two daughters were born, Janette and Rhonda. Dean and his brother, Earl and their families lived on the Erdman Ranch north of Haigler. After selling the ranch Dean and Esther moved to Haigler in 1978. Dean served on the church board, Haigler town board, Haigler School Board, was a member of the American Legion Post # 134 in Haigler and served as the caretaker for the Haigler Cemetery for many years, just retiring this year. When not serving his community, Dean owned and flew his own plane for many years and golfed on a league at the Wray Golf Club. Dean Erdman passed away Wednesday, August 23, 2017 at his home in Haigler. He was 91 years of age. He was preceded in death by his father and mother; step-mother, Marie and a brother Earl. Survivors include: Wife, Esther Erdman of Haigler, Nebraska Daughter, Janette Erdman of Wiley, Colorado Daughter, Rhonda Olson and husband, Scott of Haigler, Nebraska Brother, Paul Erdman of Benkelman, Nebraska Sister, Mae Wilkens and husband, Art of Stockton, Kansas Grandchildren: Jennifer Brown and husband, Marc; Joe Olson; Tracy Conner and husband, Matt; Brooke Olson; and Halie Peterson and husband, Ross. Great-grandchildren: Kaylin, Lane, Trynden, Tenlee, Kyle and Olson. Funeral services will be 10:30 A.M. (MT), Monday, August 28, 2017 at the Zion Lutheran Church in Haigler with Pastor Chris Farmer officiating. Interment will follow in the Haigler Cemetery with full military honors. The casket will be open for viewing at the church prior to services, the same day as services. Memorials have been established to the American Legion Post #134 and the Golden Inn. Online condolences may be left at liewerfuneralhome.com BENKELMAN MEMORIAL CHAPEL IS ENTRUSTED WITH ARRANGEMENTS

Dean Allen Erdman was born to Ernst and Blanche (Stamper) Erdman on July 2, 1926 at Haigler, Nebraska. Dean attended a country school north of Haigler through the sixth grade. He went on to parochial school in Amherst, Colorado during his... View Obituary & Service Information

The family of Dean Allen Erdman created this Life Tributes page to make it easy to share your memories.