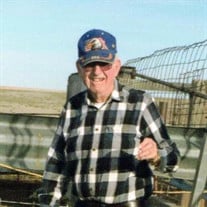 David Orlando Merklin, 90, of Benkelman, Nebraska, passed away, Saturday, August 3, 2019 at the Sarah Ann Hester Home. David O was born 16 July 1929 on a farm 3 miles south of Benkelman, Nebraska to David Albert and Manila Alfreda (Osborn) Merklin, the youngest of 5 children. He lived on the farm until the flood of 1935 destroyed the land and the family was forced to move into town. David attended Grade School and High School in Benkelman and graduated with the Class of 1948. David O was drafted into the U.S. Army on 26 July 1951 and served in Korea until his discharge 3 July 1953. Upon returning home to Civilian Life, he met and married the former Arlene Grace Wolbach on 2 June 1957 at the United Presbyterian Church in Benkelman. David and Arlene welcomed four children to this union: Gina Marie, born June 8, 1958, David O II, born September 1, 1962, Arletta Elaine, born November 11, 1963, and Frank Albert, born September 5, 1968., They lived on a farm a mile and a half west of town until January 1971 when they moved to town. In December of 1971, the family farm in Kansas was bought and in May of 1973, they bought the home in town, both of which currently remain in the family. David served in the U.S. Army Reserves from 1953 to 1959 and 1967 to 1986, retiring with 25 years serving what he referred to as “This Great Nation”. David O worked for Stan Ham at the gas station from June 1957 to August 1963. He worked for the State of Nebraska Department of Roads from 1963 to 2011, retiring with 48 years of service. David was a member of the Masonic Lodge #180 of Benkelman for over 60 years. He was a member of the United Presbyterian Church of Benkelman and attended the United Methodist and Trinity Baptist churches of Benkelman. David also served as a Boy Scout leader for several years. He was a hard-working man who taught his children that with hard work and determination, success and achievement will be greater. He was a kind and loving husband, father, grandfather, great grandfather, friend, and surrogate father to many. David rarely met a stranger and loved a good story; he was known to share one or two as well. Due to his military service, David was a very patriotic man and instilled patriotism in others - to rise, remove cover, and salute the flag. He enjoyed reading, collecting arrowheads, but he had a real passion for taking care of his cattle and his farm. He was preceded in death by his parents, David Albert and Manila (Osborn); his siblings Audrey (White), Donovan Merklin, Stanley Merklin, and Phyllis (Gray); his loving wife of 52 years, Arlene; his son, David O II and a great granddaughter Annabelle Grace Bryan. He is survived by his children: Gina Hunt and husband Carl of St. Francis, Kansas; Arletta Craw and Darin Edwards of Columbus, Georgia; Frank Merklin and wife Candie of Benkelman. 12 grandchildren: Holly Bryan and Dustin Bryan of Rocky Ford, Colorado; Stephane and Mike Workman of St. Francis; Cara and Ryan Agan of St. Francis; Jasper Hunt also of St. Francis, Kansas. Austin and Ashaneik Craw of Gaithersburg, Maryland; Alyssa Craw; and Ashlan Craw of Columbus, Georgia. Cammi, Savannah, Braxton, Kenedi and Danica Merklin of Benkelman. 12 great grandchildren. Jordan and Morgan Bryan of Rocky Ford, Colorado, Karly and Presley Workman of St. Francis, Kansas. Payton, Rylie and Parker Agan of St. Francis, Kansas. Aurora Craw of Gaithersburg, Maryland. Trey and Aiden Cook ,and unborn great grandson of Columbus, Georgia. Averie Harrison of Columbus, Georgia. Funeral services will be 10:30 A.M. (MT), Wednesday, August 7, 2019 at the Benkelman Community Building in Benkelman, Nebraska with Pastor Mike Clements officiating. Interment will immediately follow services in the Benkelman Cemetery with full military honors. Visitation will be Tuesday afternoon, August 6, 2019 from 2:00-6:00 P.M. (MT) at the Benkelman Community Building. Memorials are suggested to any Veteran’s Cause in David’s name. Online condolences may be left at liewerfuneralhome.com BENKELMAN MEMORIAL CHAPEL IS ENTRUSTED WITH ARRANGEMENTS

The family of David O. Merklin created this Life Tributes page to make it easy to share your memories.