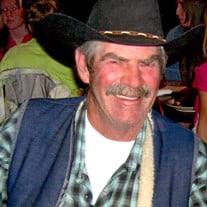 David Ridlen Sr. David Merle Ridlen was born August 4, 1950, in Imperial, Nebraska, to Paul M. and Delores (Hill) Ridlen. Dave grew up in Chase County and attended grade school in Champion. He graduated from Chase County High School with the class of 1969. On November 17, 1972, Dave was united in marriage to Pamela Sue Holien in Colorado Springs, Colorado. In the spring of 1973 the couple moved to Imperial, Nebraska, and then on to Enders in 1988 where they owned and operated the “Lakers’ Delight” store. Dave worked in the sales department at John Deere, Langenfeld Motors, Harchelroad Motors and Imperial Country Ford. Dave was currently employed at the Imperial Auction Market and he served as a state brand inspector. Dave was a 30-year member of the Imperial EMS and Fire Department; he also served on the Chase County Hospital Board. Dave was a member of the Community Players for several years; and he was a youth minister at the Hayes Center Bethel Baptist Church, also serving as a board member there. Dave loved his Lord and Savior. Dave enjoyed all sports, especially fishing, hunting, car racing, bowling, and rodeo. He also enjoyed working on the Imperial EMS haunted house for many years. Most of all, Dave loved his family (including all babies). He helped anybody, anytime, and anywhere. Dave never met a person he couldn’t talk with and he had a big smile for everyone he saw. Dave was well-known for his cowboy hat and his big smile. Dave passed away Wednesday, November 4, 2015. He was 65 years of age. Dave was preceded in death by his parents, infant son Dusty and daughter Debra. Survivors include: Wife: Pam of Enders, Nebraska. Mother-in-law: Hertha Holien of Enders, Nebraska. Son: Davey Ridlen and fiancé Amanda of Enders, Nebraska. Son-in-law: Troy Palser of Chadron, Nebraska. Grandson: Gage Palser of Chadron, Nebraska. Brother: Dennis Ridlen of Gillette, Wyoming. Sister: Janice Stone of Colorado Springs, Colorado. Brother-in-law: Larry Holien and wife Cyndee of Colorado Springs, Colorado. Sister-in-law: Pat Hammel of Imperial, Nebraska. Niece: Stacy Reasoner of Imperial, Nebraska. Special Aunt & Uncle: Verlon and Lucille Dinnel of Enders, Nebraska. Many cousins, nieces, nephews, aunts and uncles. Funeral Services will be 11:30 A.M. (Mountain Time) Monday morning, November 9, 2015 at the Imperial Bible Church with Pastor Robby Clay officiating. Cremation will follow services and a private family graveside will occur at a later date. Visitation will take place prior to services at the Imperial Bible Church. A memorial has been established in Dave’s memory. Online condolences may be left at liewerfuneralhome.com LIEWER FUNERAL HOME IS ENTRUSTED WITH ARRANGEMENTS

The family of David "Dave" Ridlen Sr. created this Life Tributes page to make it easy to share your memories.