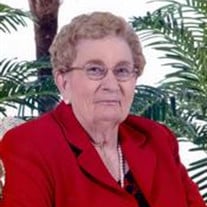 Darlene Day Viola Darlene Hink Day of Yuma, CO passed away on October 5th 2013 at the age of 89. She was born on February 22nd 1924 to Edward (Ted) A. Hink and Pearl E. Lindsey Hink in a farm house north of Haigler, NE where her grandparents had homesteaded. At the age of 6 she moved to Chase County with her parents. Her Dad rented a farm from Charlie Kimberling where they lived. Darlene had three younger brothers, Earnest Alvin Hink, Donald Burton Hink, and Leo Edward Hink. As a child she picked up corn cobs and cow chips to furnish heat in their home. She also filled the lanterns with oil. Darlene was timid as a child. Her Dad nick named her Midget which turned into Bridget when her brothers wanted to tease her. Darlene attended grade school at District 25 near Crete. She and her brothers rode a horse to school. She had the privilege of living with family friends during the week in Imperial in order to attend high school. She graduated with the class of 1941. Darlene taught school for 3 ½ years after graduation. Her classroom was in the country school. She lived in the home of one of her students. Her salary her first year was $35 a month. Her last year she received $165 a month. Darlene married Clifford Silas Day on December 22nd of 1945 in a simple ceremony at the church parsonage in Lamar, Ne. They lived with Clifford’s parents the first year. Clifford’s Dad was ill so Clifford took care of the farm and they raised 2000 turkeys. In 1946 Clifford and Darlene moved to a farm near Yuma, Colorado. Darlene was very involved with helping on the farm; milking cows and running a tractor as well as raising a large garden, cooking and sewing for her family. She also raised chickens and sold eggs in town. In these years they attended the Buffalo Grass church. Darlene played the piano, taught Sunday school and Bible School as well as hosting many teen parties for the youth of the community. She could make a big batch of cinnamon rolls to feed a crowd. She was also the treasurer for her church for a number of years. She hosted many family and church dinners serving ministers and church dignitaries. She also received the distinguished service award from her church. In order to serve her community she served as the election judge for many years. The governor even helped her celebrate her birthday with a cake on one Election Day. Darlene didn’t feel like she could be a nurse but took up the challenge upon the illness of her father Ted, and husband, Clifford, who were both sick at the same time. Upon the untimely death of Clifford at the age of 58 in 1982, Darlene and her sons took on the challenge of operating the farm. In this effort they were able to fulfill the dreams Clifford had for his family and the farm. One of pride in hard work and a job well done. She was a widow for 31 years. After her children were gone from home Darlene started taking neighborhood children to Sunday school and church with her in her van. The Gordo and Henson children made their commitment to Christian faith during Darlene’s ministry to them. Retirement hobbies for Darlene were embroidery, crochet, and quilting. She always wanted to keep her hands busy. We have many items to bring back the memories. She was also a reader. She read her Bible through several times and also enjoyed fiction. Darlene had the gift of hospitality. Her table always had room for one more so many enjoyed dinners at her home. To her great grandchildren she was known as Grandma Great. She truly was great in their eyes. She loved the time they spent with her. Her sense of humor won their hearts. From their experience they would say just be sure you avoid her fly swatter. Darlene was blessed in life with 6 children, 14 grandchildren and 19 great grandchildren. She was preceded in death by her parents, Ted and Pearl; brothers, Earnest, Don, and Leo Hink, husband Clifford, son-in-law Scott Chapman, grandson Nathan Ferguson, and great granddaughter Annie Ahern Those mourning her passing are 2 sisters-in-law. Opal Ratzlaff of Bakersfield, CA. and Elaine Hink of Imperial, NE. Darlene’s children include Marlyn and husband, Wayne Ferguson of Parks, NE., Donald Day of Prescott Valley, AZ., Bryce and wife, Lynetta Day of Yuma, CO., Charlotte and husband, Darwin Pardoe of Yuma, CO., Charlene and husband, Chuck Huwa of Yuma, CO., and Arlon and wife, Becky Day of Yukon, OK. Grandchildren include: Chad and wife, Sarah Day, Melissa and husband, Ryan Orme, Carla and husband, Josh Taylor, Brian and wife, Keri Chapman, Brandon Chapman, Brent and wife, Stacy Chapman, Brad Chapman, Josh and wife, Diedra Huwa, Jordan and wife Ashley Huwa, Robert and wife, Abbey Ahren, Molly and husband, Matt Hansen, Sarah McElyea, and Laura Ahren Memorial services were held at First Church of the Nazarene in Yuma, CO. with burial at the Crete cemetery in Champion NE. LIEWER FUNERAL HOME OF IMPERIAL WAS IN CHARGE OF ARRANGEMENTS

Darlene Day Viola Darlene Hink Day of Yuma, CO passed away on October 5th 2013 at the age of 89. She was born on February 22nd 1924 to Edward (Ted) A. Hink and Pearl E. Lindsey Hink in a farm house north of Haigler, NE where her grandparents... View Obituary & Service Information

The family of Darlene Day created this Life Tributes page to make it easy to share your memories.