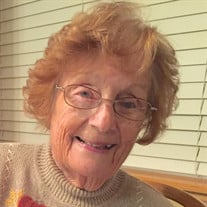 Darleen Faye Lines, the second child of Perry and Minnie (Martens) Pummel, was born on September 30, 1930 at Enders, Nebraska. She spent many happy years with her sisters and brother playing on the farm. She began school at Enders Grade School. In 1940 the family moved to the South Divide community near Prairie Rose where Darleen continued school from the 5th to 8th grade. She attended Chase County High School. Darleen did lots of babysitting for various families. Darleen and Lester Lines were married April 25, 1950 in McCook, Nebraska with her parents as witnesses. A wedding dinner was served at the bride’s parent’s home. The young couple moved to a farm in Chase County, where they lived for 14 years. All three of their children: Leslie, Timmy and Starla were born during this time. The family moved to Parks, Nebraska and lived on a ranch for 3 years. The next three years were spent on a ranch east of Imperial, before they moved to town. Darleen now worked at the Enders School Cafeteria. After working for Hoff’s Super Foods, for a while she was a cook at a restaurant before starting as a sheriff’s dispatcher and continuing for 20 years before retiring. Darleen was a great seamstress. She made many western shirts for her family and many lovely dressed for Starla. Making dolls was a hobby for her, both fabric and also porcelain. She made elaborate costumes for them, giving most of them away. One year she with a dear friend made 40 large teddy bears for Christmas gifts. Darleen has made many quilts of all sizes. Many were pieced, some appliqued, some embroidered and all given away as gifts for her family and friends. She was also a wonderful cook and made many fabulous meals for her family and friends. Darleen took her mother, Minnie, into her home, caring for her the last three years of her life. Darleen passed away Thursday evening, January 10th, 2019 at the Imperial Manor Nursing Home. She was 88 years of age. She was preceded in death by her parents, her husband, Lester, her son, Timmy Scott, her sisters Ruth and husband Ted Yeager, Judy Taylor, Evelyn and husband, Con Eagan and brother, Jim Pummel, brothers-in-law, Glen and wife, Wilda Lines, Virgil and wife, Delores Lines, Leo Lines and sister-in-law, Leaveta and husband, Donal Bremer. Survivors include: Son, Leslie Merle Lines, of Imperial Daughter, Starla Dawn O'Neil and husband, Tom, of Lincoln Grandson, Skye O'Neil Step-grandchildren, Willy O'Neil and wife, Allison and Amy Axe and Husband, Kelley Sisters: Cliffeen Pearl North and Donna Dee Way and husband, Ken Sister-in-law, Bethene Lines Great-grandchildren: Beckett and Declan O’Neil Step-great-grandchildren: Lauren, Cooper, Colin, Evan, Lila and Juliette Many nieces, nephews and a multitude of friends Memorial services for Darleen Lines will be Saturday afternoon, January 19th, 2019; 2:00 P.M. (MT) at Liewer Funeral Home in Imperial with Randy Hayes officiating. Inurnment will follow services in the Mount Hope Cemetery in Imperial. A memorial has been established in her name. Online condolences may be left at liewerfuneralhome.com LIEWER FUNERAL HOME IS ENTRUSTED WITH ARRANGEMENTS

Darleen Faye Lines, the second child of Perry and Minnie (Martens) Pummel, was born on September 30, 1930 at Enders, Nebraska. She spent many happy years with her sisters and brother playing on the farm. She began school at Enders Grade School.... View Obituary & Service Information

The family of Darleen Faye Lines created this Life Tributes page to make it easy to share your memories.