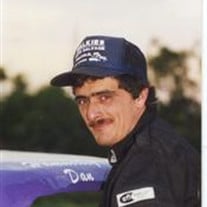 Daniel Alan Boon took his final checkered flag in life on Sunday November 24th, 2013 in Benkelman. He was born January 1, 1962 in Bridgeport, Nebraska to Ralph and Elsie Boon, the seventh child of nine. He grew up in the Brady/Maxwell area, graduating from Maxwell High School in 1980. Dan married Cindy Mohlman in 1986 and from this union two children were born, Jeremy and Tasha. The two things he loved most were his children and racing. At an early age Dan’s passion for mechanics was evident as he helped friends work on cars and ran go-karts through the streets of Maxwell with his good friend Bill. He had many interests, but ultimately decided to pursue life as a mechanic while working at brother Frank’s body shop and salvage yard in Lincoln, NE. After mastering the trade there, he moved on to Walkie’s Auto Salvage in Malcom, NE. While at Walkie’s, Dan decided it was time to pursue his passion and start his own business. He moved to Benkelman in 2001 and opened Boon’s Performance Automotive in Max, NE. Throughout his time in Max, he became very involved in the community. He had many customers that ended up becoming his good friends through the years. He always made time to put down his wrenches and visit with friends who stopped by regularly. Sometimes this meant staying later that evening in order to finish the work being done, but he did not care. It was not uncommon for him to even fix a bicycle tire or put the chain back on for any of the kids around. Racing came into Dan’s life very early. He started racing enduro races in the 1980’s at Eagle Raceway in Eagle, NE. He moved on to weekly dirt track racing shortly after that. For many years, he made his left turns in a race car but after a while he made the change to racing pickup trucks. Dan painted his pickup purple and it quickly became a fan favorite. However, the passenger side didn’t stay purple for long, as he took his “Hammerboy” nickname to heart and bounced it off the turn four wall nearly every time around the track. He raced as he lived life, with the pedal to the metal. Even after he quit racing on a regular basis, Dan continued to help local racecar drivers and spent all of his weekends at area tracks. Recently, he got into mud bogging. No one has seen Dan with a bigger smile than he had when he stepped out of the Boon Buggy. Dan was never serious, always laughing and joking with the locals hanging out at the shop. Nonetheless, he would give absolutely anyone the shirt off his back, even if it did look like a grease rag. Dan’s life from the wave of the green flag to the drop of the checkers is one to be remembered. Preceding him in death were his parents and brother Frank. Survivors include son, Jeremy, and daughter, Tasha, brothers, Ralph and Sam, sisters, Peggy, Patricia, Agnes, Denise and Susan; Monica Peterson and children Michael and Rebekah; and numerous nieces, nephews and extended family. Services will be held Saturday November 30, 2013, 9:00 a.m. (MT) at the Benkelman Community Center with Phil Harris officiating. Interment will follow at the Benkelman Cemetery. Visitation will be held Friday afternoon, November 29th, 2013 from 2-6 P.M. (MT) at the Benkelman Community Building. A memorial has been established in Daniel’s memory. A celebration of life luncheon will be held following the interment at the Benkelman Community Center. Online condolences can be left at liewerfuneralhome.com BENKELMAN MEMORIAL CHAPEL IS IN CHARGE OF ARRANGEMENTS

Daniel Alan Boon took his final checkered flag in life on Sunday November 24th, 2013 in Benkelman. He was born January 1, 1962 in Bridgeport, Nebraska to Ralph and Elsie Boon, the seventh child of nine. He grew up in the Brady/Maxwell area,... View Obituary & Service Information

The family of Daniel Alan Boon created this Life Tributes page to make it easy to share your memories.