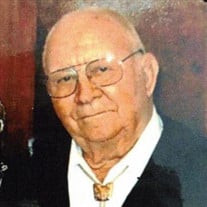 Since the birth of Dale Burdette Wilson on July 4th, 1925, he has been a “firecracker” so to speak with a very independent spirit. Dale Burdette was born to Orrin and Ethel Belle (Smith) Wilson on the family farm north of Benkelman. He was 1 of 13 children raised in a two-bedroom house. Burdette attended school until the 8th grade, then completed his GED in 1975 and graduated from Wauneta High School. During his teen years, Burdette farmed. He was hired by Bill Damrow who later became his father-in-law when he married the farmer’s daughter. Burdette and Jackie Damrow were married August 4, 1946, and their love for each other lasted 73 years. To this union 5 children were born: Laddie, Alyce, Kathy, Bill and Rich. Burdette loved dancing to Big Band music, going to card parties, playing cribbage and attending all sports activities of his children, grandchildren and the area sports teams until he wasn’t physically able. Burdette will always be remembered for his joke telling. He loved to make people laugh and laughing always accompanied some knee slapping. Jackie would say “Burdette that joke is so old”, yet soon she would join in the laughing. Burdette had a strong commitment to his Christian faith and wanted others to have that relationship. It was a must that their family regularly attended church. Burdette will be greatly missed by all who knew him. Burdette passed away Friday morning, October 16, 2020, at the Wauneta Care and Therapy Center in Wauneta, NE. He was 95 years of age. Burdette was preceded in death by his parents; wife Jackie; son-in-law Charlie Watt; granddaughters Katie Watt Bradbury and Kristina Lea Wilson. Survivors include: Son: Laddie Wilson and wife Anita of Olathe, KS. Daughter: Alyce Richard and husband Alan of Omaha, NE. Daughter: Kathy Walgren and husband Rex of Wauneta, NE. Son: Bill Wilson and wife Kim of Benkelman, NE. Son: Rich Wilson and wife Jennifer of Wood River, NE. 15 Grandchildren. 31 Great-Grandchildren. 4 Great-great grandchildren. Brother: Jack and Ina Mae Wilson of Imperial, NE. Brother-in-law: Marvin Haines of Benkelman, NE. Funeral Graveside Services for Burdette will be held Monday afternoon, October 19, 2020, 1:00 p.m. (MT), at the Benkelman Cemetery, Benkelman, Nebraska, with PastorJim Gleason officiating. A memorial has been suggested to the Wilson Family for a future designation. Online condolences may be left at liewerfuneralhome.com Rest in Peace, Dad. Love you. Hey! I have a story for you…... BENKELMAN MEMORIAL CHAPEL ENTRUSTED WITH ARRANGEMENTS

Since the birth of Dale Burdette Wilson on July 4th, 1925, he has been a &#8220;firecracker&#8221; so to speak with a very independent spirit. Dale Burdette was born to Orrin and Ethel Belle (Smith) Wilson on the family farm north of Benkelman.... View Obituary & Service Information

The family of Dale "Burdette" Wilson created this Life Tributes page to make it easy to share your memories.