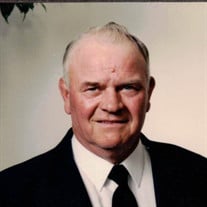 DALE BISCHOFF Dale Henry “Burley” Bischoff was born on December 15, 1933 on his family’s farm in Dundy County, Nebraska, to William and Katie (Parde) Bischoff. He was baptized on January 7, 1934, and confirmed on April 20, 1947, at St. Paul’s Lutheran Church, rural Wauneta, NE. Growing up, Dale farmed with his family and attended St. Paul’s Lutheran Parochial School. He went on to Wauneta High School where he graduated in 1951. In May of 1956, he was drafted into the U.S, Army. He attended basic training in California and was later transferred overseas, where he served in France. Dale married the love of his life, Viola L. Milner on August 7th, 1956. They spent 54 years together before Vi passed away in 2010. Dale was honorably discharged in 1958, and he and Vi, made their home in Wauneta. He owned and operated B. and D. Service for 54 years. Dale was very active in the community and his church, serving on the Wauneta Town Board, the Chamber of Commerce, and a board member of Redeemer Lutheran Church. He was a member of the Wauneta Fire Department for 40 years, the Wauneta American Legion Post# 304 for 45 years, served as a Chase County Commissioner, and a member of the Wauneta Jaycees. He loved playing football at Wauneta High School, and talked often about the many baseball and softball games he played with surrounding teams. He enjoyed the time spent having coffee with his friends, especially his close friend and business partner, Lloyd Sinner. Dale passed away Friday evening, November 30, 2018, at the Ridgewood Rehab and Care Center in Seward, Nebraska, He was 84 years of age. Survivors include: Son; Bill Bischoff and wife, Rhonda, of Wauneta, NE., Daughters; Nancy Thalken and husband, Ladean, of Lincoln, NE., Bev Kahler and husband, Bryan, of Lincoln, NE. Grandchildren; Shanna Stefkovich, of Lincoln, NE, Kassie (Jared) Austin of Ogallala, NE, Jenae Bischoff of Las Vegas, NV, and Logan Bischoff of Phoenix, AZ., Great-Grandchildren: Keiren Stefkovich, Riley Stefkovich, Reese Stefkovich, and Alivia Austin, as well many nieces and nephews. Dale was preceded in death by his parents, wife, Viola ( Milner) Bischoff, Brother; Raymond Bischoff, Sisters; Vera (Clifford) Shackelford, Elsie (Art) Coone, Gladys (Bill) Jeffries, and Clara Bischoff, Brothers-In-law; Charles Milner, Delmer Milner, Dean Miller, Ron Milner, and Sister-in-law; Virginia Milner Ridlen. Dale always put his faith in God and family before anything else. He was an avid Nebraska Husker Football fan and Dodger Baseball fan, as well as a devoted grandfather. He will be greatly missed by his children, grandchildren, and great- grandchildren, as they always loved visiting grandpa, Dude. Dale was lucky in life to be surrounded by so many friends and family. We will truly miss all of the stories he told, the advice and support he gave us, and the time spent with him. A special thank you for all the visitors, cards, letters, and prayers, from family and friends. Thanks to all the nurses, doctors, and caregivers at Ridgewood and Horisun Hospice that took care of our Dad/ Grandpa, when he needed you. Funeral services will be held Saturday, December 8, 2018, 10:00 A.M. (Mountain Time) at the Wauneta Community Building, Wauneta, Nebraska, with Rev. Keith Wellman and Rev. David McCarthy officiating. Interment will follow at the Riverside Cemetery, Wauneta, with military honors. Visitation will be held Friday, December 7, 2018, 2:00 P.M.-6:00 P.M. (Mountain Time) at Liewer Funeral Home of Wauneta. In lieu of flowers memorials have been established to the American Legion Post # 304 of Wauneta, the Wauneta Community Center, Redeemer Lutheran Church of Wauneta, and the St. Paul’s Lutheran Church, of Rural Wauneta. Online Condolences may be left at Liewer Funeral Home.Com LIEWER FUNERAL HOME OF WAUNETA ENTRUSTED WITH ARRANGEMENTS

The family of Dale H. Bischoff created this Life Tributes page to make it easy to share your memories.