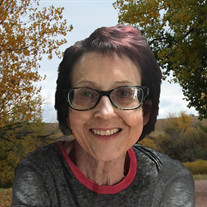 Connie Sue Hamilton On July 6, 1959 Connie Sue Hamilton was born to G.B. “Jiggs” and Patricia (Waltman) Crapson in Chadron, Nebraska. Connie’s father “Jiggs” was a newspaper man and could tell a great story about their first-born child. In Jiggs’s account, Connie was supposed to have been a boy and born on the Fourth of July, however “neither a firecracker or a boy arrived on the fourth, but we ended up with a firecracker of a surprise on the sixth” and thus a new family was formed. The family then moved to the city of Grant where Jiggs was affiliated with that town’s newspaper and then a few years later onto the Crapson family’s native town of Wauneta. While in high school, Connie began helping her father in the family’s growing newspaper business, including the flagship The Wauneta Breeze. Connie graduated with the Wauneta High School class of 1977 with her best childhood friend Becky Terry, the two would go onto marry brothers and their kids would be cousins. Connie would have three children, Gabriel, Wade, and Tucker as well as her Faithful Yorkie Gus Magoo! On April 8, 1983 Connie married Marty Hamilton and were lifelong residents of Chase County, in a few months they would have celebrated their 35th wedding anniversary together. Connie and Marty have resided in Champion, just downstream from the historic Champion Mill. Connie over the years continued to work in the family newspaper business. Connie loved arts, crafts, and scrapbooking. She had a flare for style and was known for her colorful hair styles and artsy eyewear, she was never afraid to try something new! Other areas of employment included accounting and bookkeeping roles including in recent years at the much-ballyhooed Bella Nail Salon. One could say that collaborating with her great friend Penny Zadina and the rest of the Bella girls was the highlight of her life and during tough exacerbations with her respiratory illness she would rally to make sure deadlines were met. On February 13, 2018 Connie passed away peacefully under the loving care of the nursing and medical staff at Chase County Community Hospital. Survivors include her husband Marty Hamilton and faithful Yorkie Gus Magoo of Champion, three sons Gabriel, Wade, and Tucker (Heather) Bodeman of Lincoln, mother Patricia Crapson of Wauneta, father-in-law Marvin (Joni) Hamilton of Wauneta, sisters Patricia (Jon) Moellman of Severance, Colorado and DiAnne Brown of Imperial as well as numerous aunts and uncles including Bill and Alta Crapson of Kearney, Frank and Maria Crapson of Alta Loma, California, and Claudette Gust of Rapid City, South Dakota, nieces, nephews, and friends. Preceding her in death were her father Jiggs Crapson and sister Denise Hoover as well as a host of special grandparents, relatives, and friends. An Irish themed celebration of life is planned for Tuesday, February 20th, 2018 in Wauneta at the Methodist Church starting at 1030 a.m. Mountain Time, with Rev. Melody Newman officiating: Inurnment will follow at Riverside Cemetery, Wauneta, Nebraska. Connie’s maxim of life was “Life is Good” and the family encourages everyone to live life to the fullest as she did until the very end! In Lieu of flowers, the family has requested memorials to the Champion Community Center, Champion, Nebraska Online condolences may be left at liewerfuneralhome.com LIEWER FUNERALHOME ENTURSTED WITH ARRANGEMENTS

The family of Connie S Hamilton created this Life Tributes page to make it easy to share your memories.