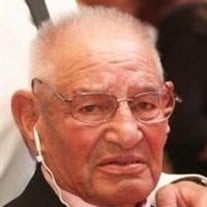 Claudio “Clyde” Lovato Clyde Lovato was born July 31, 1934, at home in Torrington, Wyoming. He was the oldest of eleven children born to Lloyd and Rupertita Apodaca Lovato. He grew up and attended school until the 6th grade when he began working to help support his brothers and sisters. During this time he became a Golden Gloves boxer out of Scottsbluff, Nebraska while still finding time to help support his family. Clyde was employed as a farm hand for the beginning of his career, he loved to drive tractors and work with his hands. After working as a farm hand for many years of his life he began employment with Couplomatic, Eaton and Kurt Manufacturing where he retired. He practiced his religion in Catholicism during his lifetime. He enjoyed Husker, Denver Bronco and Chase County Longhorn Football. Clyde was known for never missing a single sporting event that his two grandsons, William and Daniel Morales, participated in while they attended high school. Clyde passed away Friday afternoon, August 21, 2015; he was at Good Samaritan Hospital in Kearney, NE, he was surrounded by his loved ones when the Lord called him home. He was 81 years of age. Survivors include: Daughter: Francisca Morales and husband, William, of Imperial, NE Son: Felipe Valdez and wife, Chastity, of Loveland, CO Daughter: Angelina Stewart and husband, Andrew, of Loveland, CO Son: Luis Valdez and wife, Maria, of Medford, OR: Sister: Mary Carabajal and husband Ray of Cheyenne, WY Sister: Virginia Patlan of Lincoln, NE Brother: Tony Lovato and wife Rose of Lincoln, NE.: Brother: Rumaldo Lovato and wife Chris of Scottsbluff, NE Brother: Lloyd Lovato of Glendale, AZ Brother: Frank Lovato and wife Mary of Longmont, CO Brother: Albert Lovato of San Antonio, TX Sister: Annie Bucholz of Prescott, AZ Sister: Viola Hanagan of Lyman, NE Sister: Rosie Petty and husband Nick of Abingdon, Illinois; 11grandchildren and 2 great grandchildren. He was preceded in death by his parents and loving wife, Margareet Lovato, sister Irene Deitrick and one great grandson. Mass of Christian Burial services are to be held Friday morning, August 28, 2015, 10:00 A.M. (MT) at the St. Patrick’s Catholic Church, Imperial, NE with Father Bernard Lorenz officiating. No internment as Clyde’s ashes will be taken to be buried with his parents. Visitation will be held on Thursday afternoon, August 27th, 2015 2:00 P.M.-6:00 P.M. (MT) at the Liewer Funeral Home in Imperial, NE. A Rosary will be held on August 27th, 2015 8:15 P.M. (MT) at the St. Patrick’s Catholic Church. A Memorial has been established in Clyde’s Memory. Online condolences can be left at liewerfuneralhome.com LIEWER FUNERAL HOME ENTRUSTED WITH ARRANGEMENTS

Claudio &#8220;Clyde&#8221; Lovato Clyde Lovato was born July 31, 1934, at home in Torrington, Wyoming. He was the oldest of eleven children born to Lloyd and Rupertita Apodaca Lovato. He grew up and attended school until the 6th grade... View Obituary & Service Information

The family of Clyde Lovato created this Life Tributes page to make it easy to share your memories.