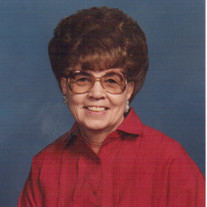 Cleo Denker Cleophia Ellen Denker was born August 12, 1931, to Richard O. and Mary Ellen(Rowley) Lane in Elsie, NE. Cleo graduated from Wauneta High School in 1950. She married Kenneth D. Denker on February 15, 1953, at St. Paul’s Lutheran Church in rural Wauneta, NE. Their first home was at Rider’s apartments in Wauneta. Shortly after, they made their home on the North Divide. Cleo was a devoted homemaker to her husband, Ken, and their children, Kerry, Debbie, and Shelly. Cleo and Ken were avid Husker fans, attending many football games, and watching the Volleyball games. Cleo was an animal lover. She took in anything that needed a home, so her children grew up with lots of dogs and cats on the farm. After losing the love of her life, Ken, Cleo moved into town with her son, Kerry, and then became a resident of Sunrise Heights in August of 2015. As a teenager, Cleo worked at Berry’s Drug Store. She later worked at Enders Lake Golf Course. Cleo was a volunteer at the Heritage of Wauneta Nursing Home for many years, helping the residents with bowling and quilting. She was an excellent seamstress, making many of her children’s clothes. She also enjoyed golf, bowling, and playing cards. Cleo loved her grandchildren and great-grandchildren dearly. She enjoyed attending their sporting events and programs. She also taught catechism classes at Redeemer Lutheran Church, where she was a member for many years. Cleo departed this life and entered her heavenly home on May 21, 2016, at Kearney, Nebraska. Cleo was 84 years of age. Survivors include: Son, Kerry Denker of Wauneta, NE Daughter, Debbie Sandman and husband, Bill of Utica, NE Daughter, Shelly Yoder and husband, Randy of Wauneta, NE 7 Grandchildren: Stacey Bauer and husband, Lance, Brian Sandman, Beau Yoder, Chase Yoder, Corey Stepler, Ryan Stepler, and Jamie Neel and Husband, Brian. 9 Great-Grandchildren: Alec and Abby Bauer, Mayson and Casia Sandman, Jensen and Creed Yoder, Taylor Lovci, Zachary and Jesse Neel Sisters-in-law: DeLores Taylor of Imperial, NE, and Vera Fosbinder of North Platte, NE. Sister and Brother-In-Law: Diann Widger and husband, Dean of Fort Morgan, CO. Cleo was preceded in death by her parents, Husband, Ken, and all of her siblings. Memorial Services will be Thursday morning, May 26th, 2016, 9:00 A.M. (Mountain Time) at the Redeemer Lutheran Church of Wauneta with Pastor David McCarthy officiating. Inurnment will follow at Riverside Cemetery in Wauneta. No visitation; Cleo chose cremation. In lieu of flowers, memorials have been established to the Sunrise Heights Nursing Home and Redeemer Lutheran Church of Wauneta. Online condolences can be left at liewerfuneralhome.com LIEWER FUNERAL HOME OF WAUNETA IS ENTRUSTED WITH ARRANGEMENTS

The family of Cleophia "Cleo" Denker created this Life Tributes page to make it easy to share your memories.