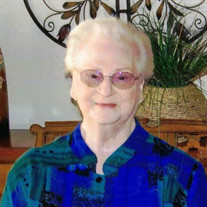 Christie Burgess Christie Morine Burgess was the eighth of twelve children born to Henry and Myrtle (Shipley) Greer on March 10th, 1930, in Jennings, Oklahoma. In 1944, she moved to California where she met the love of her life, Wayne Burgess. They were married March 28, 1945. Over the next seventeen years they had four children that they raised in California. Hugh Hampton Burgess II, January 16, 1947 Wayne Burgess Jr, August 13, 1949 Christie Marilea Burgess, July 16, 1956 Martha Louise Burgess, December 4, 1962 Christie worked for the California Conservation Corps in Auburn, CA, as a head cook and culinary instructor for many years. She enjoyed the young people as they did her. She had a little adventurous side to her. Many times, she went out to wild fire sites to provide meals for the fire fighters from the California Conservation Corps. Christie was an active member in several Baptist Churches during her life. While living in Madera, CA, she attended the Golden Valley Baptist Church, being instrumental in developing a church prayer chain. She was also a part of the DORCAS Women’s Group, spending time together in fellowship and sewing lap blankets for various groups, such as disabled Veterans and the local Children’s Hospital in Fresno, CA. Most recently she attended the Living Water Fellowship Church of Bird City, KS. She enjoyed the visits she and Pastor Terry Glasco shared. She also enjoyed being a prayer warrior, lifting up Pastor, the church family, and her own family as well, each and every day. Christie didn’t have the opportunity to attend long before her declining health and mobility kept her at home. Christie also had a love for travel, visiting family in the USA and cruising several times to Beautiful Alaska. Christie passed away Wednesday, January 29, 2020, at the Sarah Ann Hester Memorial Home, Benkelman, NE. She was 89 years of age. Survivors Include: Son: Wayne Burgess Jr. and wife, Janice, and their sons; Wayne (Rachel), Michael (Julie) Daughter: Martha Burgess and her sons; Alan and Kaleb Hugh’s children: Alice and John B. Marilea’s Sons: Thomas and Adam (Fame) Daughter-In-Law: Linda and grandson, Kenneth 20 Great-Grandchildren 2 Great-Great-Grandchildren Brother: Curtis Greer, 95, the last of her siblings. She was preceded in death by her parents, husband, Wayne Sr. May 28, 1984, Daughter, Marilea, January 3, 1999, Son: Hugh, August 25, 2013, Grandson: Bud, January 1, 2019, and ten of her brothers and sisters. Services will be held Saturday, February 8, 2020, 1:00 P.M. (PT) at Sacrament Memorial Lawn Funeral Home, Sacramento CA Local memorials have been suggested to the Burgess family for a future designation. Online condolences may be left at liewerfuneralhome.com BENKELMAN MEMORIAL CHAPEL ENTRUSTED WITH ARRANGEMENTS

Christie Burgess Christie Morine Burgess was the eighth of twelve children born to Henry and Myrtle (Shipley) Greer on March 10th, 1930, in Jennings, Oklahoma. In 1944, she moved to California where she met the love of her life, Wayne Burgess.... View Obituary & Service Information

The family of Christie M Burgess created this Life Tributes page to make it easy to share your memories.

Christie Morine Burgess was the eighth of twelve...