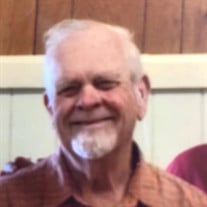 Charles Samuelson was born at home in Milford, Nebraska, to Charles Godfrey and Lois (Keefer) Samuelson on September 5, 1938, and died at Benkelman, Nebraska, on May 31, 2019. Charles’ joy was to meet people and cultivate friendships. He would greet strangers at gas stations, in airports, on the street, or at public gatherings and find a way to make a connection. At an early age Charles committed his life to Christ at a summer church camp, and he was always involved in a church wherever he lived. He studied the Bible daily and did his best to follow its teachings. Charles attended the University of Nebraska in Lincoln and received a bachelor of science in pharmacy. He began his career in Milford, working with his father who was also a pharmacist. He married Kathy Bauer in March of 1968, and they lived in Milford until 1988. He then closed the pharmacy in Milford and worked at various stores in Seward, Lincoln and Omaha. The family moved to Lincoln. After years behind the counter, he moved from pharmacy to driving a cab. He also spent time caring for his first grandchild during his years as a driver. Following his retirement, Charles and Kathy enjoyed traveling and visiting family and friends. Charles is survived by his wife Kathy, daughter Karla (Thomas) Ligenza, of Bend Oregon; sons Paul (Annie Alcorn) Samuelson, also of Bend; Eric (Jewell) Samuelson of Sutherland, Nebraska; and Tim (Laura) Samuelson of Denver, Colorado; grandsons Gavin Fusco, Dale Samuelson, Dennis Samuelson, Theodore Samuelson and Arthur Samuelson; 5 step-granddaughters; sister-in-law, Susan Reber; nephew Lee (Kaila) Reber, and many cousins and friends. He was preceded in death by his parents. A memorial service will be held for Charles at First Street Bible Church in Lincoln at 10:30 a.m. on Friday, June 28. Memorials to Benkelman Senior Center, Benkelman AWANA, and International Student Fellowship Club at UNL, PO Box C Colorado Springs, CO 80901-3000 Account 5704.

Charles Samuelson was born at home in Milford, Nebraska, to Charles Godfrey and Lois (Keefer) Samuelson on September 5, 1938, and died at Benkelman, Nebraska, on May 31, 2019. Charles&#8217; joy was to meet people and cultivate friendships.... View Obituary & Service Information

The family of Charles Samuelson created this Life Tributes page to make it easy to share your memories.

Charles Samuelson was born at home in Milford, Nebraska, to Charles...