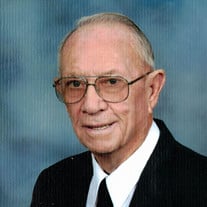 Charles “Chas” Calvin Browning, 94, passed away early Friday morning, February, 1, 2019 at his home in Imperial. Chas was born on June 13, 1924, in Chase County, Neb., to Homer and Alice Browning. He was the third of eight children. He attended school at Chase County and graduated from Chase County High School in 1941. He served in the United States Navy from 1944 through 1945. In March 1946 he married Maxine (Eskew) Browning and they were blessed with two daughters and a son. Chas carried mail for the USPS for many years, and was loved by everyone on his rural mail route. He also operated the family farm. Chas was active in the Jaycees, the American Legion, and was a volunteer firefighter. He loved to dance, play cards, fish and travel in his motorhome. He coached baseball and softball teams. Chas loved to tell stories and talk about the “olden days”. After retiring, Chas and Maxine spent winters in south Texas for a few years, then in Phoenix, AZ. Several years after Maxine’s passing in 1995, Chas married Elaine (Harms) Browning, who also preceded him in death. In 2010 Chas married Dottie DePriest. Chas was also preceded in death by his parents, four brothers, two sisters, one grandchild and one great-grandchild. Chas is survived by his wife Dottie, his children Julie and Dennis Foley, Jan and Joe Bellizzi, and Tom Browning, his sister Elsie Coen, sisters-in-law Lawanna Browning and Donna McNair, 7 grandchildren, 15 great grandchildren and many other family and friends. Funeral services will be 10:30 A.M. (MT), Tuesday morning, February 5, 2019 at the First United Methodist Church in Imperial with Pastors Dirk Weiss and Melody Newman officiating. Interment will follow services at Mount Hope Cemetery in Imperial with full Military Honors. Visitation will be Monday afternoon, February 4, 2019 from 2:00-6:00 P.M. (MT) at the funeral home in Imperial. In lieu of flowers, the family would prefer a donation to the First United Methodist Church in Imperial. Online condolences may be left at liewerfuneralhome.com LIEWER FUNERAL HOME IS ENTRUSTED WITH ARRANGEMENTS

The family of Charles "Chas" Browning created this Life Tributes page to make it easy to share your memories.