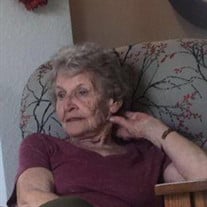 Catherine Minnie Weber passed away on December 3rd in Lincoln Nebraska. She was 88 years old. Catherine was born to Joseph and Elizabeth Simons, of Nenzel, Nebraska on April 19th, 1932. She was the second youngest of nine children. She grew up on a farm there in Nenzel. Lived in Merriman through her school days. Worked the family café. Cathy taught at a country school for two years. She told of a Christmas music program that she put together for the children, her Dad helped build a stage to allow all the students to stand in an amphitheater tree format holding candles to entertain their audience and sang Christmas songs. On December 26, 1950 Cathy married her husband Jack Weber of 66 years from Maxwell. Cathy and Jack made many memories during their military days together. Loved entertaining other couples playing bridge and pinochle to name a few. Mom enjoyed bowling and was on a league many years, having a consistent average of 175. Cathy’s favorite game of all time was Bingo. Her children used to make jokes about how she would walk through a blizzard to get to a Bingo Hall…she loved that they played at the Imperial Heights and was so proud when she won a nickel. Cathy was an amazing cook but she had to do her time in the kitchen like all of us, to become the amazing short order cook, baker, chef , that she was. One memory always told of was a beautiful shrimp meal she made. They were entertaining a couple for the evening. It would have been perfect if only she had known to peel the shrimp before serving. She and Jack raised six children on various bases in the United States and Europe Airforce bases. Some of the fondest memories made with her family were of Cathy’s continuous presence in the kitchen, cooking. As she would boast, “If you leave here hungry it’s your own damn fault!” As it was for as a child, Christmas isn't Christmas without homemade pies of every kind,, fudge, divinity, peanut brittle, and popcorn balls (her favorite) just to name a few. One year, her only son, David, came home to Brady, NE, proud in his white tailored suit, made in Hong Kong, and his siblings tried to tackle him in the snow and it just wasn’t happening. All the children sat around the kitchen table eating a “few” of Mom’s homemade goodies and played cards. They wanted to tease their Mom and hide all the goodies she had “worked and slaved” to bake before Christmas Eve. After she had gone to bed, every candy, cookie, and pie that was left was placed underneath the guest room bed, and when she awoke, they were nowhere to be found, of course Cathy had a conniption fit as she would say. We convinced her that we had stayed up all night and eaten everything while she was sleeping, and why not, she had actually baked them for us anyway. She was not happy with any of her kids, because although she had worked so tirelessly on all the homemade goodies for them, they were not to be eaten until Christmas day! They went and retrieved them from under the bed, and all was well. Cathy had a green thumb just like her mother. She and Jack would have a huge garden providing the family with fresh vegetables of every kind. Her home was always adorned with beautiful healthy plants everywhere. She and Jack traveled for seven years in their RV home visiting family, old friends, and new places, always stopping near a casino, mom enjoyed playing the slots. Sometimes we would find cold hard cash winnings in the freezer. Cathy volunteered baking pies for the Catholic Auxiliary and Veteran's club to sell. Volunteered for the St. Agnus thrift store. Cathy looked forward to her family reunions every summer and felt very blessed to have such a close family. Cathy and Jack lived in Arnold, NE, for fourteen years before settling in Imperial, NE. After she lost her husband, she moved into Independent Living at the Imperial Heights. She enjoyed it there and made many new friends and became a pro bowler on the Wii Gaming Console. With such a crazy year mom like so many others had a hard time with the facility’s mandatory lockdowns, so her children moved her out and she so enjoyed staying with family these past six months. Cathy was preceded in death by her husband Jack, her parents; Joseph and Elizabeth Simons, mother and father in law; Johnny & Mary Weber, grandson; Kendrick Blaine Weber and great-grandson; Koda Johnson. Her Sisters; Gladys, Leola, Mary Ann, Her brothers; Edward, Bernard and Andy Cathy is survived by her daughter; Connie Westbrook and husband, Bob, of Arnold, NE, son; David Weber and wife, Christine, of Franktown, CO, daughter; Pamela Diehl and husband, Scott, of Holly Hill, FL, daughter; Donna Tucker and husband, John, of Lincoln, NE, daughter; Mary Wilson and husband, Kirk ,of Imperial, NE, and daughter; Tracy Dallas and husband, Pete ,of Albuquerque, NM, her Sister; Alma Gordon of Salina, KS, Sister; Stella Nash, and husband, Jack, of Cassville, MO. Her sister in law Barbara Gutherless of Brady Ne. 29 grandchildren, 40 great-grandchildren, 13 great-great-grandchildren, plus numerous nephews and nieces A memorial has been suggested to St. Agnes Catholic Church, P.O. Box 309, Stapleton, NE 69163 Services will be lived streamed starting at 10:00 A.M. (Central) via Carpenter Memorial Chapel's Facebook page

Catherine Minnie Weber passed away on December 3rd in Lincoln Nebraska. She was 88 years old. Catherine was born to Joseph and Elizabeth Simons, of Nenzel, Nebraska on April 19th, 1932. She was the second youngest of nine children. She grew... View Obituary & Service Information

The family of Catherine M Weber created this Life Tributes page to make it easy to share your memories.

Catherine Minnie Weber passed away on December 3rd in Lincoln...