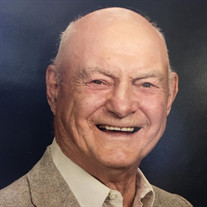 Carl Edwin Lutz was born to Christian and Bertha (Talmon) Lutz on November 14, 1925 on his beloved farm in northwest Dundy County where he resided for eighty-nine (89) years. He passed away at the Dundy County hospital on Tuesday, May 2, 2017 at ninety-one (91) years old. He was the youngest of five (5) children: Martin, Alfred, Loraine (Osborn), and Helen (Stevens). His father passed away in 1935 when he was ten (10) years old. He attended the country school, District #37, near his house and moved to Benkelman to attend high school. After his high school graduation in 1942, he took over the full-time care of the family farm. Six years later on August 29th,1948 he married Jean Shrum, the love of his life. She was the daughter of Bill and Gladys Shrum from the Rollwitz area. They complemented each other in a bond that would last a lifetime. They were married in his family’s church, the Zion Lutheran Church. Carl and Jean started their married life at the home place. Their daughter, Cathy, was the first of their children to be born in 1949. A son, Jim, joined the family shortly after in 1951. Scott, their second son, was born in 1958 followed by their youngest daughter, Lori, in 1965. Their young married life was full of love and dedication to each other and their children. Carl and Jean worked many long hours in the fields along with taking care of their cattle. All the children worked on the farm throughout the years. He saw many innovations in farming—from using a horse drawn planter, to using a tractor in the 1940s. Electricity and irrigation made its way to Dundy County during this era of hardworking women and men. His grit, along with others in his generation, progressed their operations and society. His loyal character built bonds with others as he always went the extra mile for his neighbors. He never knew a stranger and was always willing to have a conversation with all. Carl had a passion for horses and teaching his children, grandchildren, and great grandchildren to ride. He was a long time horse 4-H leader, fair board member, and served on the church council. He was a member of the Nebraska Cattleman’s Association and enjoyed spending his time evaluating prospective bulls to improve his cattle herd. He had a knack for choosing good black Angus cattle and took pride in caring for them. He was dedicated in caring for his loving wife, Jean, especially in their later years. His gentleness and nurturing spirit remained strong during their journey together. He is survived by his wife; his sister, Helen; and his children and spouses—which include Cathy & Mike David, Jim & Linda Lutz, Scott & Brenda Lutz, and Lori & Todd Zurcher. His legacy of love will continue in his eleven (11) grandchildren, thirteen (13) great-grandchildren and six (6) step-grandchildren. His strong faith and will remains in each of us. Funeral services will be 2:00 P.M. (MT), Friday afternoon, May 5, 2017 at Zion Lutheran Church in Benkelman with Pastor Doug Hjelmstad officiating. Interment will follow at Benkelman Cemetery, Benkelman, Nebraska. Visitation will be Thursday afternoon, May 4, 2017 from 2:00-6:00 P.M. (MT) at Zion Lutheran Church in Benkelman. A memorial has been established in Carl’s memory. Online condolences may be left at liewerfuneralhome.com BENKELMAN MEMORIAL CHAPEL IS ENTRUSTED WITH ARRANGEMENTS

Carl Edwin Lutz was born to Christian and Bertha (Talmon) Lutz on November 14, 1925 on his beloved farm in northwest Dundy County where he resided for eighty-nine (89) years. He passed away at the Dundy County hospital on Tuesday, May 2, 2017... View Obituary & Service Information

The family of Carl Edwin Lutz created this Life Tributes page to make it easy to share your memories.