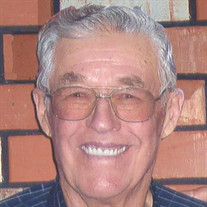 Byron Leo Els was born March 24, 1929 at Best, Colorado to Carl & Alice (Steiner) Els, and passed away at the Dundy County Hospital in Benkelman on February 8, 2020. Byron attended school in Laird, Colorado and also in Wray, Colorado. When his dad moved north of Benkelman, he finished his schooling there, graduating from Benkelman High School in 1947. He married Leah Richard on December 1, 1948. The newlyweds worked for a farmer north of Benkelman shucking corn, shocking cane, and helping on the farm. The following year they moved south of Max to work for a farmer. Their son, Richard, was born there in 1949, and then three years later daughter, Judy, was born in 1952. In 1956 a neighbor came over and asked Byron and Leah if they'd like to buy their farm. So they moved 3 miles southeast to their present farm. It was here that their youngest son, Dennis, was born in 1958. Byron always had time for his kids. He'd come inside and say “I'm going for a ride!” and all 3 kids would run and jump in the pickup. Family time on Sundays meant driving to relatives' houses for family dinners or fishing. Byron took great pride in his farm. He loved planting the wheat, and raising certified seed wheat (which he was widely known for). Seeing a newborn calf take its first breath and watching the calves play gave him great joy. He loved Hereford cattle. But with change and encouragement from his son, Richard, who had joined his dad on the farm, they did introduce Angus to the herd. Byron enjoyed going to farm sales just to see if he might find something he could use on the farm, but mostly to visit with the neighbors, and for sure to get a piece of pie. Cherry was his favorite. Soon the grandkids were showing up wanting to come work to make some money. They fixed fence, drove tractors, combines, and trucks, and cleaned the seed wheat. Whatever they did it didn't seem like work as long as Grandad was along. But they always knew they had Sunday off to do what they wanted. Byron was a member of the Presbyterian Church which he attended faithfully, and took great pride in the work he did for his church and its congregation. Byron will be dearly missed by his wife, Leah, of 71 years, his daughter Judy Lutz (Joe), brothers Herbert Els and Ivan Els (Bert), his sister-in-law, Alice Baney, grandchildren, greatgrandchildren, great-great-grandchildren, nieces, nephews, and many friends. He was preceded in death by his parents and in-laws, and two sons, Richard and Dennis. Funeral Service will be held Saturday morning, February 15, 2020, 10:30 A.M. (Mountain Time) at the Benkelman Community Building, Benkelman, NE., with Rev. Herb Els and Aaron Bolerjack officiating. Interment will follow at the Benkelman Cemetery, Benkelman. Visitation will be held before services Saturday morning, February 15, 2020. Memorials may be made in Byron's name to the Dundy County Food Pantry, c/o Ministerial Alliance PO Box 625, Benkelman, NE 69021 Online condolences may be left at Liewer Funeral Home.Com BENKELMAN MEMORIAL CHAPEL ENTRUSTED WITH ARRANGEMENTS

Byron Leo Els was born March 24, 1929 at Best, Colorado to Carl & Alice (Steiner) Els, and passed away at the Dundy County Hospital in Benkelman on February 8, 2020. Byron attended school in Laird, Colorado and also in Wray, Colorado. When... View Obituary & Service Information

The family of Byron L Els created this Life Tributes page to make it easy to share your memories.