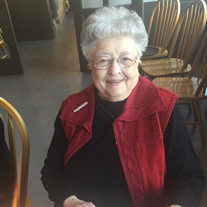 Bernadene “Bunnie” Jussel Bernadene Stella (Modrell) Jussel was the first child born to Irene (Dunham) and Bernard Modrell at McCook, Nebraska, on October 9, 1931. Her Father started calling her Bunnie a little“Love” name that she carried for the rest of her life. At a very early age she moved with her family to a farm north of Palisade, Nebraska, the farm where her Mother was raised. The family attended the United Methodist Church of Palisade. Bunnie attended Country School, District #7, for seven years. She finished 8th grade at Palisade Public Schools graduating from Palisade High School in 1949. Bunnie continued her education at the Central Business College in Denver, Colorado. She gained employment at the Denver Fire Clay Company in 1950. Bunnie continued working in Denver until her marriage to Leroy F. Jussel on October 18, 1953, in Palisade, Nebraska. To this union two sons were born; Steven Nelson and David Lee. The family made their home in Wauneta, Nebraska, all their married life. Bunnie was a busy house wife and assisted her husband in his business ventures. She was very active in the United Methodist Church of Wauneta, teaching Sunday school, singing in the choir, and serving on the Church Board of Trustees. At the time of her death she was serving on the Frenchman Valley Development Board. Family was very important to Bunnie and she loved being a housewife. Bunnie passed away early Wednesday morning, January 22, 2020, at the Great Plains Health Center in North Platte, NE. She was 88 years of age. Survivors Include: Son: Dave Jussel and wife, Vickie of Waddell, AZ 5 Grandchildren: Chris Jussel and wife Jamie, of Imperial, Nebraska, Brent Jussel of Phoenix, Arizona, Faith Franckey and husband Dustin of Paxton, Illinois, Michelle McCarthy of Peoria, Arizona, and Hope Jussel of Washington, Illinois. 7 Great-Grandchildren Brother: James Modrell and wife, Eloise, of Algona, IA She was preceded in death by her parents, husband; Leroy of 59 years, son; Steven, and grandson; Danny Joe Jussel Memorial services will be held Saturday, January 25, 2020, 11:00 A.M. at the United Methodist Church of Wauneta, NE, with Pastor Elias MuKindia and Mr. Page Johnston officiating. A private family inurnment will follow Monday, January 27th, 2020, at Fort McPherson National Cemetery. No Visitation, Bunnie chose cremation. Bunnie’s wishes were for a memorial to be designated to the United Methodist Church of Wauneta, NE. No Flowers On line condolences may be left at liewerfuneralhome.com LIEWER FUNERAL HOME OF WAUNETA ENTRUSTED WITH ARRANGEMENTS

The family of Bunnie Jussel created this Life Tributes page to make it easy to share your memories.