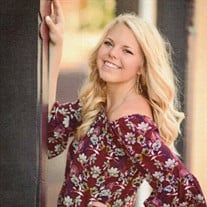 Bridgette Lynn Odens, age 20 of Imperial, Nebraska, passed away on Friday, March 1, 2019. She was born November 7, 1998 in Yankton, South Dakota to Kyle and Becky (Wenzel) Odens. Bridgette was baptized on December 27, 1998 at Emmanuel Reformed Church in Springfield, South Dakota. Bridgette was a member of Zion Lutheran Church in Imperial, Nebraska. She was confirmed on May 5, 2013. Bridgette grew up extremely loved by her family. She enjoyed her friends and her sister, Courtney. She spent many hours playing at the park in the back yard and riding her bike. This helped her have great success at the annual pedal tractor pull at the Chase County Fair. She played summer softball and was on the swim team, During high school Bridgette played volleyball, was a cheerleader, was a member of the 9th Street Singers, One-Act Play, and Speech team. She was successful in these various activities. Bridgette was a member of The National Honor Society and was her class president all four years of high school. Bridgette graduated on May 13th, 2017 from Chase County High School. She graduated with honors and said the benediction at the graduation ceremony. Bridgette attended the University of South Dakota her freshman year and studied accounting/business. She transferred to the University of Nebraska Lincoln in the fall of 2018. She continued studying in accounting/business. She shared many times how she was so glad she transferred and loved everything about college life in Lincoln. She loved her roommates and talked about the many hours of laughing, talking, and eating snacks. Bridgette was very driven in her academic studies as well as her physical health. She was very proud of being on the Dean’s List and being a member of the Delta Sigma Pi fraternity. She was also very excited to be learning about taxes. She loved exercising and eating healthy. Bridgette enjoyed cooking, baking, and trying new recipes. She loved to try new foods. Her favorite at the time was sushi. She also enjoyed guacamole. Bridgette enjoyed traveling and had many great opportunities to see many parts of the United States with family and friends. One of her favorites was the Freedoms Foundation at Valley Forge opportunity she was given. Bridgette was extremely positive and enjoyed life. Bridgette and her sister, Courtney spent many hours FaceTiming while Bridgette was in college. They spent countless hours playing house, store, and restaurant as they were growing up. Their relationship grew bigger than just sisters and they became true friends as young women. Throughout high school and summer breaks Bridgette babysat for many families in the Imperial area. She also was a lifeguard, worked at True Value, 509 Broadway, and the Imperial Country Club. She was looking forward to the possibility of an internship this coming summer in Lincoln or Omaha. Bridgette is survived by her parents Kyle and Becky Odens of Imperial; Sister Courtney Odens of Imperial.Grandmother Darlene Holec of Tabor, SD; Grandparents Jerome and Donna Odens of Springfield, SD. Aunts and Uncles Bill and Kim Wenzel of Tabor, SD, Quentin and Jackie Thompson and their children Sean and Erica of Mitchell, SD, Doug and Deon Eickhoff and son Austin of Spencer, IA, Robin and Diane Holec of Tabor, SD and their children Derek of Sioux Falls, SD, Sara, and Ashley of Omaha, NE, Kevin Holec of Minneapolis, MN and his son Trenton and Cate Holec and their children Kaylee, Jaxson, and Leo of Des Moines, IA. Steve and Laurie Odens of Imperial, NE and their children Katie Odens and fiance Kegan Kline of New York, NY; Ira and Kenzie Cornelious of Peoria, AZ ; Tanner Walker and his girlfriend Kailey Place of Peoria, AZ; Eric and Kim Odens of Bakersfield, CA; Trent and Amber Odens and daughter Brynlee of Holyoke, CO. Bridgette will also be missed by many friends and extended family. Bridgette is preceded in death by her grandfathers William E. Wenzel and Marvin Holec, great-grandparents Otto and Hulda Frey, Herbert and Johanna Wenzel and step great-grandma Edna Wenzel, John and Miriam Tolsma, and Joe and Hattie Odens, uncle Robert Kampshoff and cousin Emily Dawn Odens. Funeral Services for Bridgette Odens will be 10:30 A.M. (MT), Thursday morning, March 7, 2019 at Zion Lutheran Church in Imperial with Pastor David Kahle officiating. Interment will follow services in Mount Hope Cemetery in Imperial. No viewing or visitation. A memorial has been established in Bridgette’s Memory. Online condolences may be left at liewerfuneralhome.com LIEWER FUNERAL HOME IS ENTRUSTED WITH ARRANGEMENTS

The family of Bridgette Lynn Odens created this Life Tributes page to make it easy to share your memories.