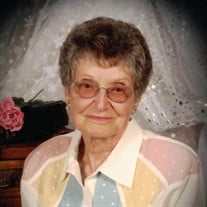 Having blessed her with 97 years, 2 months, and 21 days of earthly life, God called Bonnie Jane (Loop) Hager home to Him and her eternal life on Monday, September 14, 2020. Bonnie passed away peacefully in her home with her family beside her. Bonnie was born June 24, 1923, north of Stratton on the Loop family homestead. She was the youngest child of George A. and Melissa M. “Bess” (Crawford) Loop. She attended country school and Stratton High School, graduating in 1940. Bonnie caught the eye of Lloyd “Shorty” Hager at a local dance. They were married on August 31, 1940, in Oberlin, Kansas. The young couple began their married life living and working for various farmers in Hitchcock and Dundy counties. In 1941, they moved to Nevada, Missouri, following Lloyd’s family who had relocated there from the Max area. On July 20, 1941, Bonnie & Lloyd welcomed their daughter, Betty Elaine, into the family. When Lloyd entered the Navy and began his service during World War II, Bonnie and Betty followed him to bases in Louisiana and Texas. During his overseas deployment Bonnie, with her young daughter, returned to live with family at Stratton. In the years following the War, the family lived in Denver, Colorado; Stratton; Trenton; McCook and Eugene, Oregon. During the time spent in McCook, Bonnie attended the Beauty Academy and received her cosmetology license. In June of 1949, Bonnie opened her beauty shop in their home on the south end of Trenton’s main street. She enjoyed caring for her customers’ needs for nearly 50 years, retiring in 1998. Bonnie took time away from her business to do some traveling with Lloyd and to follow the activities of her granddaughters. Bonnie was a past member of the Professional Business Women’s Association and had served on the Eldorado Manor board. Lloyd & Bonnie moved to Imperial in July 1998 where they enjoyed their remaining years with their family. Preceding Bonnie in death were her parents, parents-in-law Claude and Clara Belle Hager, husband Lloyd Hager and son-in-law Gerald Jessee. Siblings and their spouses Vola (Lyle) Carter, Bill (Dorothy) Loop and Beryl (Glenn) Harper. Those left to rejoice in her salvation include her daughter Betty Jessee, Imperial, NE; Granddaughters Melissa (Tony) Cochran and Julie Jessee of Imperial, NE and Katie (Justin) Markheim of Gering, NE; Great-grandchildren Bonnie Cochran (Sergio Santiago), Cody Cochran, Grayson Markheim and Carrick Markheim; Great-great-grandson Samuel Cochran-Santiago. Bonnie chose cremation, there will be no visitation. A memorial service for Bonnie will be held Friday, October 2, 2020, at 1:30 p.m. (MT) at St. Paul’s Lutheran Church, rural Wauneta, with Pastor Keith Wellman officiating. In consideration and care of each other, the family encourages the use of masks at the memorial service. Inurnment with immediate family only will be in the Trenton Cemetery, Trenton, NE. Memorials have been suggested to the Hitchcock County Museum, Southwest Nebraska Meals on Wheels, and the Community Hospice of McCook. On line condolences maybe left at Liewer Funeral Home.com LIEWER FUNERAL HOME OF WAUNETA ENTRUSTED WITH ARRANGEMENTS

Having blessed her with 97 years, 2 months, and 21 days of earthly life, God called Bonnie Jane (Loop) Hager home to Him and her eternal life on Monday, September 14, 2020. Bonnie passed away peacefully in her home with her family beside her. Bonnie... View Obituary & Service Information

The family of Bonnie J Hager created this Life Tributes page to make it easy to share your memories.