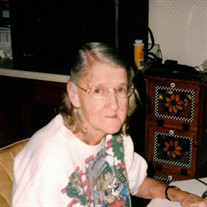 Betty Jane Steinke was born on March 1, 1929 at Hood River, Oregon to parents, Irvin Lincoln Dykes and Emma Meek Worley. She had four older brothers. As she was growing up she worked in the fields picking strawberries and vegetables; she later worked in the canneries. Betty married Elton New in 1950 and had four children: Marie, Steven, Raymond and Earl. She got a nursing degree in 1956 while in Oregon. She moved herself and her children to Imperial, Nebraska in 1959 here Betty worked at the Chase County Hospital as a nurse. She married Theodore “Ted” Brewer Sr. on February 10, 1962. To this union she had five children: Terry, Shirley, Dora, Ted Jr. and Teresa. She became a stay-at-home mom to raise her children. Betty spent time with her family camping and fishing. She enjoyed listening to music, writing letters to family and friends, playing cards, embroidery and reading her bible. She also took time to trace her family tree and its history. On March 3, 1985 she married Guy Purdy of Wauneta, Nebraska. She helped him with his trash hauling business until his death on September 18, 1991. In later years, she married Eugen Steinke of Wauneta where she resided until his death in January of 2002. When her health started failing, she resided at her daughter Dora’s where she still enjoyed family gatherings, camping and fishing. In 2010 Betty moved into the Imperial Manor. Betty Steinke, age 89 of Imperial, passed away at the Imperial Manor Nursing home on Sunday, December 2, 2018. She was preceded in death by her mother and father; brothers: Warren, James, Cloudy and David; husbands: Elton New, Ted Brewer Sr., Guy Purdy and Eugene Steinke; son, Raymond New; daughter, Shirley Brewer; granddaughters, Sue Lynn Brewer and Terra Lea Harris. She is survived by her sons: Steven and Earl New of Oregon; Terry Brewer of Palisade; and Ted Brewer Jr. and wife, Wendy of Wauneta; daughters: Marie Vance of North Carolina, Dora Harris and husband, Terry of Wauneta; and Teresa Parker and husband, Terry of Grand Island, Nebraska; 14 grandchildren and 32 great-grandchildren. Memorial services will be held at a later date. No viewing; Betty chose cremation. A memorial has been established in her memory. Online condolences may be left at liewerfuneralhome.com LIEWER FUNERAL HOME IS ENTRUSTED WITH ARRANGEMENTS

Betty Jane Steinke was born on March 1, 1929 at Hood River, Oregon to parents, Irvin Lincoln Dykes and Emma Meek Worley. She had four older brothers. As she was growing up she worked in the fields picking strawberries and vegetables; she later... View Obituary & Service Information

The family of Betty J. Steinke created this Life Tributes page to make it easy to share your memories.