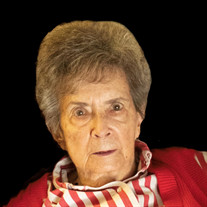 Betty Jean Smith, 89, of rural Champion, died Monday, December 24, 2018 at Imperial Manor in Imperial, NE. Funeral services will be at 10:00 A.M. (MT), Saturday, December 29, 2018 at Zion Lutheran Church in Imperial with the Reverend David Kahle officiating. Interment will follow at Mount Hope Cemetery in Imperial. Visitation will be help on Friday afternoon, December 28, 2018 from 2:00-6:00 P.M. (MT) at the funeral home in Imperial. Online condolences may be left at liewerfuneralhome.com Liewer Funeral Homes is in charge of arrangements. Betty Jean (Morgan) Smith was born August 23, 1929 in her grandparent’s (Samuel and Lottie Kaufman) house in Lincoln, Nebraska. She was the oldest of four children born to George and Iola Morgan. Betty attended grades one through six in a one-room school house in Republic, Kansas, grades seven through ten in Lincoln, Nebraska, and grades eleven and twelve in Imperial graduating from Chase County High School in 1947. She married Alfred Shield on October 2, 1947. Two children, Tom and Beverly, were born to this union. They made their home in Enders for eight years and then moved to Imperial where Betty worked at a tax office for two years and in the ASCS office for eight additional years. On December 1, 1967 Betty married Vilas Smith and they lived on a farm near Champion and for the next fifty years she enjoyed being a farmer’s wife, mother, grandmother, and great-grandmother. Betty was active in Imperial’s Senior Center for thirty-one years, both serving on the board of directors and fixing food for events. She was a member of the VFW auxiliary in Imperial for fifty-eight years. She was an avid reader and enjoyed doing crossword puzzles. Betty had a life-long love of cooking and was an excellent seamstress. She had a big heart for her family and, of course, her dogs and cats. Betty was preceded in death by her husband Vilas, parents George and Iola Morgan, and sister Joann Bruntz. She is survived by her son, Tom (Judy) Shield of Kearney, daughter Beverly (Pete) Snyder of Imperial, step-children Lloyd (Rhonda) Smith of Champion, Marla Smith of Imperial, Merle (Larry) Konken of Hershey, Maxine Smith of Cheyenne, WY, sister Lois Silvester of Schuyler, brother George (Pat) Morgan of Helendale, CA, ten grandchildren, and twenty-six great-grandchildren. Memorials are suggested to the Imperial Senior Center.

The family of Betty Jean Smith created this Life Tributes page to make it easy to share your memories.