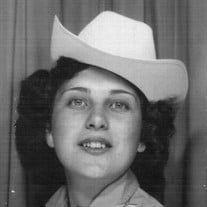 Betty L. Reichert was born June 24th, 1937, at Havelock, North Dakota, to Peter and Elizabeth Jung. Betty was the youngest of twelve children. As a young lady she graduated from High School in New England, North Dakota, in 1957. Betty met Robert J. Reichert in 1956 and the couple were married on June 24th, 1957, in New England. To this union three sons and two daughters were born. Bob and Betty settled in Benkelman, Nebraska, where they have made their home since 1964. Betty enjoyed sewing and crocheting, and spending time in her garden. She especially loved to be with family and could be found camping with them most weekends. Betty passed away peacefully surrounded by family on Thursday afternoon, May 11th, 2017, at her rural home, near Benkelman, Ne. Betty was 79 years of age. Survivors Include: Husband: Bob Reichert of Benkelman, NE Son: Russ Reichert and wife, Kasey, of Benkelman, NE Grandchildren: Ally Jablonski (Luke), Lexee Reichert, Jordon Dutcher, Terra (Orrin) Riggs Brother: Peter Jung of Dickinson, N.D. Betty was preceded in death by her parents; son; Ron; and her mother and father in Law. Graveside inurnment services were held Monday afternoon, May 15, 2017, 2:00 P.M. at the Benkelman Cemetery, with granddaughters, Ally and Lexee presiding. Online condolences can be left at liewerfuneralhome.com BENKELMAN MEMORIAL CHAPEL ENTRUSTED WITH ARRANGEMENTS

The family of Betty L. Reichert created this Life Tributes page to make it easy to share your memories.