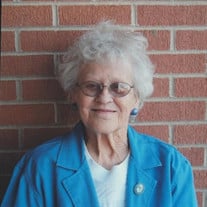 Bertie F. Stroup, 95, of Benkelman, Nebraska, passed away on Sunday, October 17, 2021, at the Sarah Ann Hester Home in Benkelman. Her granddaughter, Emilee, was with her. Bertie went to find her husband and family. Bertie was born in Parks, Nebraska, on December 15, 1925, to Willard Loice Lawson and Clara Priest Lawson. She was the middle child of five. Bertie grew up in and around the Dundy County area. She attended area schools until the 8th grade, when she went to work for neighbors and family. Bertie was raised in the Baptist Church and attended the Trinity Baptist Church here in town and later in the chapel at the Hester Home. She loved listening to the scriptures and music every Sunday she was able to attend. Bertie met her husband, Harold N. Stroup, through friends and family. They were united in marriage on October 25, 1943, in St. Francis, Kansas. The couple made their home south of Benkelman on the Kielback ranch. Three children were born to make a rounded family, one boy Lyle and two girls Virginia and Cindy. They later were appointed guardians of Harold’s three youngest siblings when his mother passed away. The older two siblings were almost of age and soon started their own lives. The youngest, Valjean Stroup, was 12 and was more like a sister to their older children, some even thought she was. The family lived a few places in and around the area, Parks, Max, McCook and Benkelman working on farms and ranches. Bertie was a real farm wife for 45+ years, even after they moved into Benkelman. She raised her family with a firm hand and belief in God. Family was very important to her. As the grandchildren came along, she was over the moon about them, but they were never allowed to be disrespectful…they all knew that look and it only took once. Bertie was a self-taught seamstress, making and patching clothing for her family. She also worked outside the home, in the late 1960’s she worked as a CNA at the Hester Home and later at the sale barn as a waitress. Bertie also worked at the Tiger Hut and at Reedes Drugstore before retiring. Bertie loved to play games, read, color and visit with the other residents at the Home. She always said she could just sit and watch people go by, she called it “People Watching”. Bertie was preceded in death by her parents: Willard and Clara Lawson; in-laws: Albert and Nellie Stroup; four siblings: Marvin Lawson (Barbra), Raymond Lawson, June Golding (Don), and Charlie Lawson (Diane); husband: Harold Stroup; son: Lyle Stroup (Sher); and two grandsons: Kevin Jensen and Heath Swigert; and all of the Stroup siblings. Survivors include: Daughter: Virginia Jensen and husband Elwin of Texas. Daughter: Cindy Swigert of Benkelman, NE. 4 Grandchildren: Laurie (David) Robbins of WA, Keith Jensen of TX, Alisha (Roy) Shapley and Emilee Swigert (John Burgess), all of Benkelman, NE. 3 Step-grandchildren: Jamie (Dana) Ham Baggs of CO, Jeff (Diane) Ham of WA, and Jodi Ham Custer (Shelley Leitner) of Omaha, NE. 12 Great-grandchildren: Clara Russell of HI; Jaclyn Russell of CO; Katlyn, Lynae, Julia and Jordan Swigert, all of CO; Roy (Trip), Zachary, AnnaLee, Olivya, and Zaylee Shapley, and Abbigail Swigert-Burgess, all of Benkelman, NE. 2 Step Great-grandsons: AJ and Bryce Baggs of CO. 4 Great-great granddaughters: Rikki Robbins; twins, Sophiya and Carolyne Meyers; and Liliegh Puga, all of CO. Sister-in-law: Dorothy (Raymond) Lawson of CO. Numerous nieces and nephews throughout the states. Memorial services for Bertie will be held Saturday, November 13, 2021, 2:00 p.m. (MT), at Trinity Baptist Church in Benkelman, Nebraska, with Pastor Mike Clements officiating. Inurnment will follow at the Benkelman Cemetery at a later date. A memorial has been established in Bertie’s memory to the Swigert family for a future designation. On-line condolences may be left at liewerfuneralhome.com BENKELMAN MEMORIAL CHAPEL ENTRUSTED WITH ARRANGEMENTS

Bertie F. Stroup, 95, of Benkelman, Nebraska, passed away on Sunday, October 17, 2021, at the Sarah Ann Hester Home in Benkelman. Her granddaughter, Emilee, was with her. Bertie went to find her husband and family. Bertie was born in... View Obituary & Service Information

The family of Bertie F Stroup created this Life Tributes page to make it easy to share your memories.