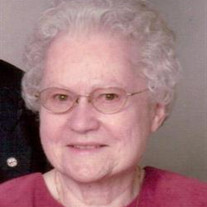 Bernice Haarberg Bernice Selma (Ackermann) Haarberg, 88, of Imperial, died July 9th, 2015, at the Imperial Manor Nursing Home. Bernice Selma (Ackermann) Haarberg was born to Jacob and Lydia (Unger) Ackermann on February 14th, 1927 at Indianola, Nebraska. She lived on the farm until she was three years old and then moved to McCook, Nebraska in 1930. Her father worked as a carpenter and built their first house in McCook. The family attended Peace Lutheran Church. She attended parochial school in McCook through the seventh grade and then transferred to Public school and graduated from McCook High School in 1944. When she was 16 years old, she worked at F.W. Woolworth Dime Store until she graduated from McCook Junior College in 1946. Bernice was baptized March 20th, 1927 at St. John’s Lutheran Church, Ashe Creek, southeast of McCook and was confirmed May 19th, 1940 at Peace Lutheran Church in McCook. She taught Sunday School and was a longtime Walther League and choir member. After graduation, Bernice worked at various places including the Nebraska Department of Assistance and Child Welfare, the US Air Force Base north of McCook and then the US Department of Interior, Bureau of Reclamation. She was united in marriage to Dean Edgar Haarberg of Imperial, Nebraska on April 25th, 1954 at Peace Lutheran Church in McCook. They made their home on the farm 1 ½ miles west of Imperial. To this union three sons were born: James, Wayne and Brian. After semi-retiring in 1991 they moved to town. Bernice was a member of Zion Lutheran Church, Willing Workers, taught Vacation Bible School, was a member of the Lutheran Layman’s League and was a longtime choir member. Bernice and Dean celebrated 61 years of marriage. She was an avid cook, enjoyed traveling, gardening, flowers and spending time with family. She was preceded in death by her parents, Jacob and Lydia Ackermann and her brother Arthur. Survivors include her husband, Dean Haarberg of Imperial; children: James Haarberg and wife, Mary of Imperial, Wayne Haarberg of Imperial and Brian Haarberg and wife, Sondra, of Frisco, TX; grandson, Nathan Haarberg; step-grandchildren: Amy Roeder of Omaha, NE, Kevin Thomas of Omaha, NE and Heather Bennet of Texas; one sister: Vera Eaton of Arvada, CO Brother: Harvey Ackermann, of McCook, NE. Funeral Service for Bernice Haarberg will be held 10:30 A.M. (Mountain Time), Monday morning, July 13, 2015, at the Zion Lutheran Church of Imperial, NE. with Pastor David Kahle officiating. Interment will follow at Mount Hope Cemetery, Imperial. Visitation will be held Sunday afternoon, July 12, 2015, from 2:00 P.M. – 6:00 P.M. (Mountain Time) at the funeral home in Imperial. In lieu of flowers; memorials have been established to the Zion Lutheran Church Choir & Bell Choir and the Zion Lutheran Church Willing Workers. Online condolences can be left at liewerfuneralhome.com LIEWER FUNERAL HOME ENTRUSTED WITH ARRANGEMENTS

The family of Bernice Selma Haarberg created this Life Tributes page to make it easy to share your memories.