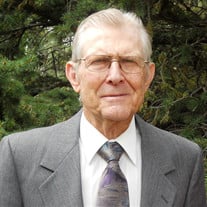 Obituary of Bernard Marvin Bernard Earl Marvin was born on December 4, 1931 to Loyd Edward and Clara Verneal (Casebeer) on the home place west of Imperial and passed away June 15, 2019. He grew up on the family farm doing interesting things such as watching threshing crews, corn shelling operations, and learning cattle, hog, and chicken management. The family farm was founded by his Grandfather over 100 years ago. Bernard was baptized into the Christian faith at a young age and served the Lord by singing in the choir and the church quartet, also teaching Sunday school class and helping with many church functions during his lifetime. He attended a rural school two miles away and then graduated from CCHS high school where he played in the band and was on the basketball team. His life changed dramatically after graduation when his father, Loyd, died of cancer while in the process of building a new dairy barn. In November that fall was a large blizzard where power was lost with snow drifts to contend with. Then in January of 1949 the record setting three day blizzard hit, paralyzing the entire country, causing countless livestock deaths in the whole area. Power outages were large and long lasting. The farm gradually got going again, the new barn was completed and milk was sold to the Imperial dairy store for several years from the milking Shorthorn cattle herd. Later, a change was made to an Angus cross and eventually became nearly pure Angus from which many stocker feeder calves were sold. In the early 1950`s Bernard had the good fortune to meet his future wife, Margaret Ellen David, who was teaching at the Lamar school. They both participated in an adult play which led to their marriage in October 19, 1952, which has been a happy and productive time for many years. Bernard and Margaret were blessed with two children Lucinda Jo and Brent Loyd, who were raised on the farm. They were able to use the established cattle herd for their 4-H beef projects, which proved a great place to teach lasting values. They were both able to graduate from college with advanced degrees which served them well their entire lives. Bernard sold Moorman`s feeds for several years and always enjoyed meeting and visiting with his customers. He joined the Jaycees for a time in which he chaired several different projects. He also belonged to a bowling team which gave him much enjoyment. Hunting pheasants was another source of pleasure for many years. He loved keeping records, which included weather, financial, farm business, and family photographs. Bernard enjoyed helping all 4 grandchildren learn to drive a stick shift pick-up. Music was always a special part of his life as he had a large collection of music which has been added to many times and was an enjoyment for both he and his family. He helped his grandson, Blake, in his singing career for many years. In return, Blake taught Bernard the basics of computer use, which was a great benefit for the entire family. Bernard fought cancer for over twenty years but was thankfully able to keep going and enjoy life on the farm. Consequently, he had no regrets as some types of cancer are much worse. After a large operation in Denver several years ago it gradually kept worsening until it took over his life. He was preceded in death by his parents, his two brothers and their wives, Vincent and Thyra Marvin, Keith and Lorene Marvin, niece Sylvia Marvin, and nephew Rod David. His survivors include his wife, Margaret, daughter Lucinda Jo (Lance) Van Anglen, Houston TX, son Brent Loyd (Virginia) Marvin, Parker, CO, grandsons Blake (Jenny) Marvin, John Van Anglen, granddaughters Christa (Bryan) Close, April Van Anglen. great grandson Ethan Close, former daughter in law Julie, brother in law Ward (Patricia) David, niece Cynthia (Gale) Haynes, other nieces and nephews, relatives and friends. Funeral services will be Wednesday, June 19, 2019, 10:30 A.M. (MT) at the First United Methodist Church in Imperial with Pastor Dirk Weiss officiating. Interment will immediately follow services in the Mount Hope Cemetery, Imperial. Visitation will be Tuesday afternoon, June 18, 2019 from 2:00-6:00 P.M. (MT) at the funeral home in Imperial. Memorials are suggested to the American Cancer Society in Nebraska or to Donor’s Choice in memory of Bernard. Online condolences may be left at liewerfuneralhome.com LIEWER FUNERAL HOME IS ENTRUSTED WITH ARRANGEMENTS

Obituary of Bernard Marvin Bernard Earl Marvin was born on December 4, 1931 to Loyd Edward and Clara Verneal (Casebeer) on the home place west of Imperial and passed away June 15, 2019. He grew up on the family farm doing interesting things... View Obituary & Service Information

The family of Bernard Marvin created this Life Tributes page to make it easy to share your memories.