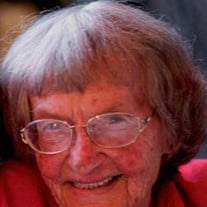 BARBARA E. McNAIR Barbara Ella McNair (Moreland) was born to Milton C. Moreland and Clara H. Moreland (Bremer) in rural Chase County on February 15, 1917. Barbara attended grade school and high school in Chase County graduating from Chase County High School in 1933. She then went to Normal School in Kearney, Nebraska where she received her teaching credentials. Barbara taught grade school in rural Chase County. Often she rode a horse to the school house. Sometime in 1940 she met her future husband John F. “Jack” McNair on a date arranged by her sister Betty who at the time was dating Jack’s brother, Bob. On July 26, 1941 Barbara and Jack went to Phillipsburg, Kansas with friends Duane Bremer and his girlfriend Pauline Edgehill where the two couples were married in a double ceremony. They built a house south of Imperial on the family farm where they lived until 1945 when Jack was drafted into the Navy. Jack then moved their house to Imperial so that Barbara and their son Jim could live in town. After Jack returned from the service they moved back to the farm where Barbara lived until she moved to the Imperial Manor last year. Barbara was an active member of the Eagles. She was involved with the Chase County Historical Society and was a founding member of the Champion Women’s Club. She was also involved in 4H while her children were growing up. Barbara was a proud farmer and operated the family farm for many years after Jack’s death. Barbara was preceded in death by her parents Milton C. and Clara H. Moreland, sister; Betty Kregger, brothers George and Gene Moreland, her husband John F. “Jack” McNair and daughter-in-law Suzanne McNair. She is survived by her son James Milton and wife Judy McNair of Escondido, California, son; John T. “Terry” McNair of Mt. Pleasant, Iowa, grandson Sean and wife Narriman McNair of Ramona, California, granddaughter Kelli Major (McNair) and husband Dannial of San Diego, California, grandson Ryan McNair and wife Kate of Kansas City, Missouri and great grandchildren Katalin McNair, Troy Major and Heather Major. Funeral Services will be held Thursday morning, March 12th, 2015, 10:30 A.M., at the United Methodist Church of Imperial, with Lay-Pastor Melody Newman officiating. Interment will follow at Mount Hope Cemetery, Imperial. Visitation will be held Wednesday afternoon, March 11th, 2015, 2:00 P.M. – 6:00 P.M. at the funeral home in Imperial. A memorial has been established to the Chase County Historical Society. Online condolences can be left at liewerfuneralhome.com LIEWER FUNERAL HOME ENTRUSTEFD WITH ARRANGEMENTS

The family of Barbara McNair created this Life Tributes page to make it easy to share your memories.