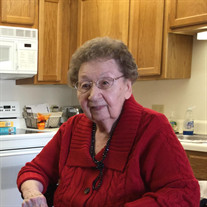 Ava Marie (Messinger) Rouze was born May 7, 1924 on the family farm in Red Willow County, NE to Edwin and Frieda (Ruby) Messinger. Ava passed away in Imperial, NE on Tuesday, October 23, 2018 at the age of 94. Ava attended grade school and high school in Danbury. She was president and valedictorian of her class. Following high school, she attended Nebraska State Teacher’s College of Kearney, received a two-year teaching certificate, and taught for several years in Stamford, Oxford, Culbertson and Imperial. Ava married Willard Marsh Rouze on June 17, 1951 in McCook. They were married for 58 years prior to Willard’s passing. Ava and Willard had three children, Ned, Nan and Grant and made their home on Broadway until 2011 when Ava moved to the Parkview Heights. Throughout her life, Ava enjoyed music. In her early years, she played the trombone. She was a proficient pianist and played the organ at the United Methodist Church for 41 years. She played at worship services, cantatas, weddings, funerals and averaged 46- 52 times performance per year. She spent many hours practicing with the choir and special singing groups and touched many lives through this service. Ava and Willard Rouze owned the Rouze Hardware store in Imperial for years and she spent many hours working alongside her husband in the family business. Ava and Willard were longtime supporters of the Imperial Public Library and they were chosen to cut the ceremonial ribbon for the opening of the renovated library in 2006. During her time at the Parkview Heights, Ava enjoyed the support and friendships of the residents and staff. Ava also enjoyed the friendship and companionship of Mary Carman for over twenty years. She was preceded in death by her husband Willard Marsh Rouze, and her parents Edwin and Frieda Messinger. Survivors include: son, Dr. Ned C. Rouze and wife Dr. Alison Clay of Durham, NC; daughter Nan McHugh of Cincinnati, OH; son Grant M. Rouze and wife Deborah Richardson of Cedar Rapids, IA; brother Dee Messinger of McCook, NE, sister-in-law Delyn Rouze of Montgomery, AL; sister-in-law Gloria Rouze of Houston, TX; granddaughter Lauren Santoianni and husband Nathan Santoianni; grandsons John McHugh of Columbus, OH and Brian McHugh of Natchitoches, LA; and great-grandson Jackson Robert Santoianni. Funeral services will be 2:00 P.M. (MT), Friday afternoon, October 26, 2018 at the First United Methodist Church in Imperial with Pastors Melody Newman and Dirk Weiss officiating. Interment will follow in the Mount Hope Cemetery, Imperial. Time for viewing will be from 12:00-2:00 P.M. (MT), Friday, October 26, 2018 at the church prior to services. A memorial fund has been established for the Lied Imperial Public Library. Online condolences may be left at liewerfuneralhome.com LIEWER FUNERAL HOME IS ENTRUSTED WITH ARRANGEMENTS

Ava Marie (Messinger) Rouze was born May 7, 1924 on the family farm in Red Willow County, NE to Edwin and Frieda (Ruby) Messinger. Ava passed away in Imperial, NE on Tuesday, October 23, 2018 at the age of 94. Ava attended grade school and... View Obituary & Service Information

The family of Ava Marie Rouze created this Life Tributes page to make it easy to share your memories.