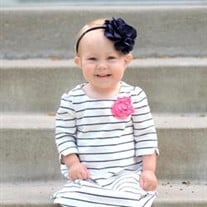 Audrey Ann Fish Haberman, age 2-and-a-half, passed away in the early morning hours of Thursday, March 13. Audrey lived a life much larger than her 3-foot stature would suggest. She was born in Bellevue, Nebraska on August 22, 2011 to Mr. and Mrs. Sam Haberman, and quickly displayed strengths of both her mother and father. Her loved ones describe Audrey as strong-willed and endlessly loving, a delicate balance between influence and compassion that most adults do not master, even given much longer to try. Audrey learned to paint through her Grandma Cindy, enjoyed splashing in water and being outside, and took her extended family on a trip to Disneyland this February. She had a way with animals, especially her puppy Lilly and the dog next door, Stella. Those closest to her say she taught them to appreciate every moment and notice small things, just like Audrey did.  Audrey is preceded in death by Grandpa Steve Fish. Audrey leaves behind a family forever blessed by her, including parents Sam Haberman and Erica Fish, Grandparents Senator Mark and Kathy Christensen, Cindy Simon and George Haberman, her aunts and uncles, Stephen and Amy Haberman, Annie Haberman, Emilee Fish, Steven Fish, Isaiah, Ryelee, Brooklyn and Malachi Christensen, five cousins, and five great grandparents, including her namesake great-grandma Audrey Ann Simon. For most of Audrey’s life she battled a rare degenerative genetic disorder. Held by her parents and surrounded by family, Audrey’s pain ended on Thursday, March 13. A celebration of her life will be held at Dundee Presbyterian Church in Omaha, Nebraska on Monday, March 17 at 5pm. An open house and viewing will be held in Imperial, Nebraska on the day prior to the funeral. A grave site service will be at Oxford Cemetery in Oxford, Nebraska on Tuesday, March 18 at 3pm. The Fish Haberman family asks any charitable donations to be sent directly to their chosen beneficiaries in Audrey’s honor: Trappist Caskets (trappistcaskets.com) and Community HealthCare and Hospice in McCook, NE. Online condolences can be left at liewerfuneralhome.com Liewer Funeral Home in Imperial, NE is in charge of arrangements.

Audrey Ann Fish Haberman, age 2-and-a-half, passed away in the early morning hours of Thursday, March 13. Audrey lived a life much larger than her 3-foot stature would suggest. She was born in Bellevue, Nebraska on August 22, 2011 to Mr. and... View Obituary & Service Information

The family of Audrey Ann Fish Haberman created this Life Tributes page to make it easy to share your memories.

Audrey Ann Fish Haberman, age 2-and-a-half, passed away in the...