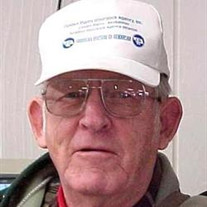 Arden Ham Arden Emmett Ham was born July 25, 1928 at the Family Farm in Dundy County, Nebraska to Earl D. “Vic” Ham and Mayme (Bond) Ham. He went to meet our Lord and join his wife on Saturday, May 2, 2015 on their 67th wedding anniversary. Arden was baptized in the Methodist Church in Benkelman, as an infant, and joined the Methodist Church when he was a teenager. He attended Country School and then graduated from Benkelman High School in 1946. On May 2, 1948 he married Rosemary Joyce Howard at Zion Lutheran Church in Benkelman. After they were married he joined the Zion Lutheran Church. To this union were born two sons, Eugene and Jay Dee. Arden farmed for several years, and then worked for the City of Benkelman as a lineman, and was a member of the Volunteer Fire Department. Later he leased the Service Station from Stanley Ham for several years. When Pete Christensen retired he bought part of his insurance agency and was an agent for 25 years. While selling insurance, he and Joyce opened a furniture store which they operated for 20 years. For years he belonged to Country Music Benkelman and was the MC for them. He announced races, parades and events for the community. Arden was a charter member of the Jr. Chamber of Commerce and the Lions Club. He was president of the Chamber of Commerce. He was on the Lutheran Church Council for 8 years, and also spent many hours working on the new Lutheran Parish Hall. Arden was preceded in death by his parents, Wife Joyce Ham, Granddaughter Helen Mayme Ham, Brothers Vaughn and Dale, Infant Sister Audra, Sisters Bernice Russell and Beulah Jean Edwards and Grandson, Cameron Brecka. Arden leaves behind: Sons: Eugene Ham and wife, Candy of Mok Po, South Korea and Jay Dee Ham and wife, Karen of Garden City, Kansas. Brother, Norlin Ham and Wife, Myrna of Orland, Florida Grandchildren: Casey Sova, Seth Shaefer, Amber Ham and Quade Ham and 9 great-grandchildren Funeral Services will be 10:00 A.M. (MT), Tuesday morning, May 5, 2015 at the Zion Lutheran Church in Benkelman with Pastor Doug Hjelmstad officiating. Interment will follow at Benkelman Cemetery, Benkelman, Nebraska. Visitation will be from 2:00-6:00 P.M. (MT), Monday afternoon, May 4, 2015 at Zion Lutheran Church in Benkelman. A memorial has been established to the Zion Lutheran Church of Benkelman’s Youth Group. Online condolences can be left at liewerfuneralhome.com BENKELMAN MEMORIAL CHAPEL ENTRUSTED WITH ARRANGEMENTS

The family of Arden Emmett Ham created this Life Tributes page to make it easy to share your memories.