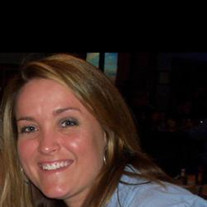 Angie Stamm Angela Sue Stamm was born July 20, 1971, in Benkelman, Nebraska, to Russell Stamm and Phyllis (Ham) Stamm. Angie grew up in Benkelman, Nebraska, where she attended Dundy County High School and graduated in 1989. As a youth, Angie was very active in Horse 4-H and was Grand Champion in Showmanship. Angie was baptized and confirmed to the United Methodist Church in Benkelman. In high school, she participated in Mock Trial, school plays, National Honor Society, Future Business Leaders of America (FBLA), band, volleyball, track and basketball. After high school, Angie moved to Kearney, Nebraska, where she received her Bachelor of Science – Management degree from the University of Nebraska – Kearney in 1993. Angie then moved to Anderson, Indiana, where she began her career with Corning Revere. In 1996, Angie relocated to Kansas City, Missouri, where she continued her career with Corning Revere as a retail manager later becoming District Manger of stores from Texas to Minnesota. Angie later worked for Lockheed Martin making numerous trips to Washington, DC working with the FAA. Angie was dedicated to her work and developing her staff to be future leaders. Angie loved spending time with friends and family. She was an avid reader and loved Husker football. She had a love of children and was always the biggest kid in the house and managed the kid’s table at family events ensuring everyone ended up with a “happy plate”. Angie had an infectious energy – she would light up a room with her entrance – she never knew a stranger and could turn anything into a social event. Angie had a contagious smile and her unforgettable laugh was identifiable anywhere. She was an amazing daughter, sister, co-worker and friend. Angie passed away December 24, 2014, at her home in Belton, Missouri. She was 43 years of age. Angie was preceded in death by paternal grandparents: Harry and June Stamm; maternal grandparents: Byron and Edna Ham; uncle: Gary (Dutch) Stamm; cousins: Tylene Stamm and Baby Girl Stamm; and many dear friends. Survivors Include: Grandmother: Eula Ham of Ft. Collins, Co. Mother: Phyllis Daugherty and Ronald of Trenton, NE. Father: Russell Stamm and wife Angie of Benkelman, NE. Brother: Terry Stamm and wife Deb of Benkelman, NE. Sister: Jody Stamm of Atlanta, GA. Brother: Dustin Stamm of Wichita, KS. Nephews/Niece: Kanen, Kohl, and D.J. Stamm; Alyssa Stamm Funeral Services for Angie will be held Tuesday afternoon, December 30th, 2014, 2:00 P.M. (MT), at the Benkelman Community Building, Benkelman, Nebraska with Pastor Sheila Taylor officiating. Interment will follow at the Benkelman, Cemetery. Family visitation only. A memorial has been established in Angie’s memory. BENKELMAN MEMORIAL CHAPEL ENTRUSTED WITH THE ARRANGEMENTS

The family of Angie Stamm created this Life Tributes page to make it easy to share your memories.