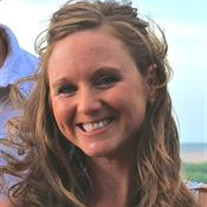 Amanda (Poppe) Johnson Amanda Rae Johnson, age 26 of Enders, Nebraska, passed away on Wednesday June 26, 2013. She was born December 13, 1986 in Grant, Nebraska to Craig and Evonne (Schilke) Poppe. Amanda was a member of Zion Lutheran Church and was baptized on January 18th 1987. Growing up Amanda was known as “short pockets” until finally changing it to “shorty.” During school she took great pride and dedication in her athletics, from shooting baskets for pennies to dribbling all through the house. Amanda had a natural ability to learn and was not known to study to get perfect grades. Amanda graduated as valedictorian in 2005 from Chase County High School then proceeded to earn her bachelors degree in agribusiness from Kansas State University in 2008. On December 12, 2009 Amanda was married on the beaches of Puerto Vallarta, Mexico to the love of her life Curtis Johnson. After marriage the couple settled in Imperial, Nebraska to farm and raise a family. In the summer of 2011 the couple moved to their dream house overlooking Enders Lake. Amanda loved being at the lake and was quoted saying “From grade school up, I have spent most of my summer days laking it.” On August 30, 2012 Amanda and Curtis were blessed with a beautiful daughter, Keller Rae. Amanda was instinctively a great mother and loved spending every hour with Keller. Becoming a mother was one of her dreams come true and Keller had become her true joy in life. Amanda was an incredible person that enjoyed life to the fullest. Her smile and laughter was able to brighten up any room. Everyone adored Amanda, especially her husband Curtis. Amanda and Curtis enjoyed traveling together to places in the United States as well as the Cayman Islands, Jamaica, Mexico, and Hawaii. Amanda enjoyed being outside in the sun, so naturally her hobbies included swimming, golfing, boating, kayaking, hiking, gardening, and just enjoying the outdoors with her family and friends. In the winter Amanda spent her time crafting, snow skiing, and wondering when spring will arrive. Amanda is survived by her husband Curtis Johnson; Daughter Keller Johnson; Parents Craig and Evonne Poppe of Imperial; Sister Jennifer (Derek) Stafford of Imperial; Niece Jordyn & Nephew Dawson Stafford; Grandmother Joyce Schmitt of Henderson, NE. Amanda will also be missed by her numerous aunts, uncles, cousins, and close friends. Funeral Services for Amanda Johnson will be held Tuesday July 2, 2013 at 10:30am at Zion Lutheran Church in Imperial with paster David Kahle officiating. Interment is to follow at Mount Hope Cemetery in Imperial. Liewer Funeral Home in Imperial is in charge of arrangements. A memorial has been established in Amanda’s memory.

The family of Amanda Johnson created this Life Tributes page to make it easy to share your memories.