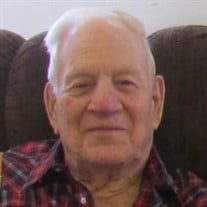 Alvin was born in north rural Haigler, Dundy County, Nebraska on June 26, 1930 to Roy Harmon and Mabel Irene (Lindsey) Harmon. He was the youngest of three children. In 1937 the family moved to the farm west of Imperial in Chase County where he lived his entire life, except while in the U.S. Army. Alvin served his country from Oct 18, 1951 to Oct 17, 1953 attaining rank of Corporal on March 21, 1953. He attended District 4 rural grade school and then graduated from Chase County High School in 1948. He missed his high school graduation as he had come down with the mumps. Football was his major sport and he played on both the 2nd team and 1st team all four years of high school and was named Outstanding School Athlete his senior year. On August 12, 1956 he married Cora Maye Murray, in his parent's shady floral garden yard at the current farmstead and they celebrated their 65th wedding anniversary in 2021. To this union one son, Roger Lee was born. Alvin was baptized and became a member of the Lamar Evangelical United Brethren Church, which later merged with the Imperial United Methodist Church. His favorite pastimes were fishing, hunting, attending farm auctions, collecting antiques and flipping pancakes for the church’s Groundhog Supper. Farming was his occupation, having raised wheat, corn, soybeans and sugar beets. He also farmed the EUB- Lamar Trinity United Methodist wheat ground for the church. Alvin served on the Frenchman Valley Coop junior board, Amherst, Colorado Coop 9 years and as Treasurer of School District 66. Alvin passed away, Friday, November 26, 2021, at the Chase County Community Hospital, Imperial, NE. He was 91 years of age. Alvin was preceded in death by his parents, brother, Everett and sister, Dorothy. Alvin is survived by his wife, Cora Maye and son, Roger of Imperial as well as numerous nephews, nieces and many friends. Visitation will be Wednesday afternoon, December 1, 2021, 2:00pm – 6:00pm with family present at Liewer Funeral Home, Imperial. Services are scheduled for Thursday morning, December 2, 2021, 10:30am at the United Methodist Church in Imperial, with Pastro Debra Copple, Robert Harmon, and Fr. Gary Brethour officiating. Interment will follow at Mount Hope Cemetery, Imperial. A memorial, in Alvin’s memory, has been suggested to the Harmon Family for a future designation. On line condolences may be left at liewerfuneralhome.com LIEWER FUNERAL HOME ENTRUSTED WITH ARRANGEMENTS

Alvin was born in north rural Haigler, Dundy County, Nebraska on June 26, 1930 to Roy Harmon and Mabel Irene (Lindsey) Harmon. He was the youngest of three children. In 1937 the family moved to the farm west of Imperial in Chase County... View Obituary & Service Information

The family of Alvin Harmon created this Life Tributes page to make it easy to share your memories.