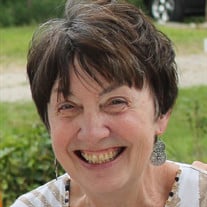 Aliska Jean Owens was born January 12, 1945 at St Catherine’s Hospital in McCook NE, to her parents Wayne and Olive (Sidman) Boyer. She started Elementary School in Danbury, NE until 2nd Grade when they moved to McCook, NE. She then attended School Districts 16 and 8 before graduating from McCook High School in 1963 with perfect attendance all four years. She later attended Business School in Omaha NE. She married John Owens on August 21, 1965 at St. Patrick’s Church in McCook, NE. She worked for the McCook National Bank before moving to Chadron to join her husband where she then worked at the Bank of Chadron. The couple then moved to Sidney, NE for a year where she worked for The American State Bank. The couple moved to Big Piney, WY for a year before settling in Benkelman, NE which they would make their permanent home. After settling in Benkelman, Aliska was a stay at home mom while the children were young. When the children were older she began working at Owens True Value where she would lovingly be known as the paint lady. Aliska was a member of St. Joseph’s Catholic Church in Benkelman, NE where she also participated as a member of the Alter Society as well as many years in the Church Choir. Throughout her lifetime she enjoyed many hobbies. Growing up she loved Coyote Hunting with her Dad. She also competed in Barrel Racing where she won numerous trophies. She loved golfing and playing bridge with friends. Her favorite thing in life was helping others and laughing with friends. Most importantly for Aliska happiness was being a Mother and Grandmother. She enjoyed family events and was especially happy to bring everyone together for her 50th Wedding anniversary a few years back. Aliska passed away Monday, July 24, 2017 in her home. She was 72 years of age. She is survived by her beloved husband John Owens of Benkelman, NE, her daughter Lisa and her husband Kriss Krutsinger of Imperial, NE. her son Brad Owens of Benkelman, NE, and son Mitchell and his wife Alyssa Owens of Beatrice, NE. Grandchildren, Breanna Krutsinger and fiancé Ross Sueper, Korey, Gabrielle, and Delaney Krutsinger, Colton, Justin, Konner, Liam , and Emma Owens. Sisters Bonnie Brown of Indianola, NE and sister Becky and husband Dennis Rautenberg of Canon City, CO, and numerous nieces and nephews. She was preceded in death by her parents Wayne and Olive (Sidman) Boyer. A Rosary will be recited at 7:00 P.M. (MT), Sunday evening, July 30, 2017 at St. Joseph’s Catholic Church in Benkelman with Father Matthew Eickhoff leading. A Memorial Mass will be held at 10:30 A.M. (MT), Monday morning, July 31, 2017 at St. Joseph’s Catholic Church in Benkelman with Father Matthew Eickhoff celebrating. Inurnment will immediately follow services in the Benkelman Cemetery. No visitation; cremation was chosen. A memorial has been established to the Dundy County Library to be used to purchase children’s books. Online condolences may be left at liewerfuneralhome.com BENKELMAN MEMORIAL CHAPEL IS ENTRUSTED WITH ARRANGEMENTS

Aliska Jean Owens was born January 12, 1945 at St Catherine&#8217;s Hospital in McCook NE, to her parents Wayne and Olive (Sidman) Boyer. She started Elementary School in Danbury, NE until 2nd Grade when they moved to McCook, NE. She then... View Obituary & Service Information

The family of Aliska Jean Owens created this Life Tributes page to make it easy to share your memories.