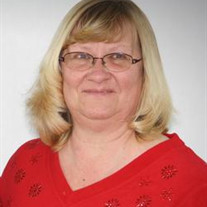 Alice Musgrove Alice Joann Musgrove, 51, of Imperial Nebraska, passed away Thursday, February 6, 2014. She was born to Lewis Lee Bliss and Patricia Ann Stewart, June 21, 1962, in Hebron, Nebraska. Alice graduated from Hebron High School in 1980 and received an Associate’s Degree in Elementary Education from the Southeast Community College of Fairbury Nebraska in 1982. She married Curtis Musgrove on June 19, 1982 in Hebron Nebraska, and they have lived in Imperial Nebraska for the past 17 years. Alice spent many years in education, teaching in churches and schools alike. She spent 14 years at Chase County Schools as a teacher’s aide, and the past 8 years at Crossroads Wesleyan Church. Her passion for education and teaching was one of the most important parts of her life. She is survived by not only her family, but in the lessons she imparted to the children she loved so much. Alice is survived by her husband and two children: Curtis Musgrove of Imperial, Nebraska; Matthew Musgrove of Olathe, Kansas; and Michael Musgrove of Imperial, Nebraska. She is also survived by her mother, Patricia Knigge of Alexandria, Nebraska and three siblings and spouses: Edward and Sharon Bliss of Hebron, Nebraska; James and Lora Bliss of Sutherland, Nebraska; and Lisa and Allen Meyer of Fairbury Nebraska. She is preceded in death by her father, Lewis Lee Bliss. Memorial Services for Alice will be Tuesday morning, February 11, 2014, 10:30 A.M. (MT) at Crossroads Wesleyan Church in Imperial with Pastor Todd Burpo and Pastor Phil Harris officiating. A private family inurnment will take place at a later date. The family will greet friends Monday afternoon, February 10, 2014 from 3:00-6:00 P.M. (MT) at Crossroads Wesleyan Church in Imperial. There will be no viewing; Alice chose Cremation. In lieu of flowers, the family is requesting that memorial donations be made out to the American Cancer Society. Online condolences can be left at liewerfuneralhome.com LIEWER FUNERAL HOME IN CHARGE OF ARRANGEMENTS

The family of Alice Joann Musgrove created this Life Tributes page to make it easy to share your memories.