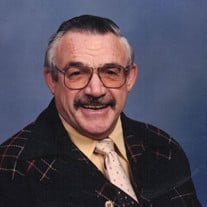 Alfred Dean McCrumb was born October 12, 1936 to Silas Carl and Lula Ethel (Long) McCrumb in Denver, Colorado. He attended school and graduated from high school in Meeker, Colorado. Al volunteered for the United States Army in June of 1955 and was honorably discharged at the rank of Specialist in May of 1958. Alfred worked at Martin Marietta in Denver Colorado where he met Marilyn Krausnick. The couple was married on June 12, 1960 at the Mount Zion Methodist Church in Rural Wauneta, Nebraska. Al and Marilyn made a home 14 miles south and .5 miles west of Wauneta where they farmed for 27 years. In 1987 Alfred retired from farming and he and Marilyn moved to Wauneta where they owned and operated the Corner Cupboard and Motel until his retirement. He was a member of the Prairie Statesman Chorus where he sang for more than 40 years. Al was also a member of the Penny Punchers Stock Club. Alfred loved to sing, whether it be in the Statesman Chorus or the Coon Creek Quartet. He sang the “Lord’s Prayer” at many events and performed “O Holy Night” every Christmas at the Mount Zion Church. Al also was a talented wood-worker; he built much of his own furniture. Alfred passed away Saturday evening, May 25, 2019, at the Wauneta Care and Therapy Center. Alfred was 82 years of age. He was preceded in death by his parents; wife, Marilyn; his son Jerry McCrumb; brother, Mac McCrumb and wife Lillian; brother, Dale McCrumb and wife, Esther and sister, Evelyn and husband, George. Survivors Include: Daughter, Shelia Cooley and husband, Ron of Ogallala, NE 4 Grandchildren: Luke McCrumb and wife Brittany of Kansas City; Steven McCrumb of Kansas City; James McCrumb and wife, Megan of Imperial, Nebraska; and Ryan McCrumb and wife, Renae of Wauneta, Nebraska Great-grandchildren: Trey, Ryleigh, Konner, Kameran, Gaberial, Ashton (AT), Cadiance, Brittany, Greeg, Braxton, Gentry, Sydney and Rilynn Great-great-grandchild, Levi Nieces and nephews: Diana Krausnick of Greeley, Colorado; Dwana and Keith Roschewski of Benkelman, Nebraska; Karen and John Metzger of Benkelman; Bill and Barb McCrumb of Colorado Springs, Colorado; Kathy and Bill Morrison of Wyoming; Dennis and Diane McCrumb of Washington State; Walt McCrumb of Montana; Bob and Carolyn McCrumb of Longmont, Colorado and many great-nieces and nephews. Graveside Inurnment Services will be held Saturday, June 22, 2019, 2:00 P.M. at Riverside Cemetery, Wauneta, Nebraska, with full military honors. Pastor Keith Wellman will be officiating. A memorial has been suggested to the FFA of Wauneta, Nebraska. Online condolences may be left at liewerfuneralhome.com LIEWER FUNERAL HOME OF WAUNETA ENTRUSTED WITH ARRANGEMENTS

The family of Alfred D McCrumb created this Life Tributes page to make it easy to share your memories.